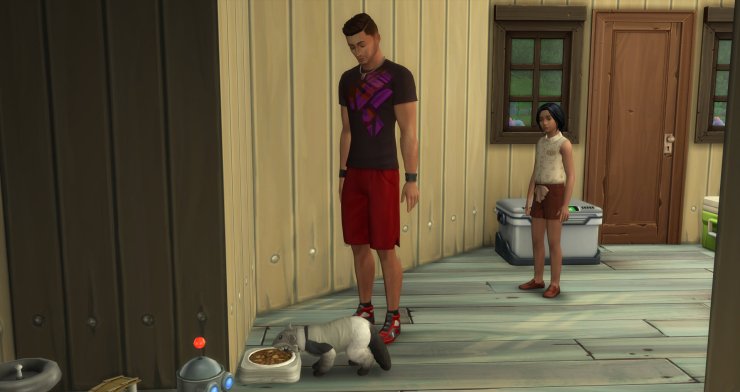 This chapter is probably going to be kinda long.  I suppose we’ll see.  I really think, at this point, that Chatterbox is more Enzo’s cat than Sierra’s. 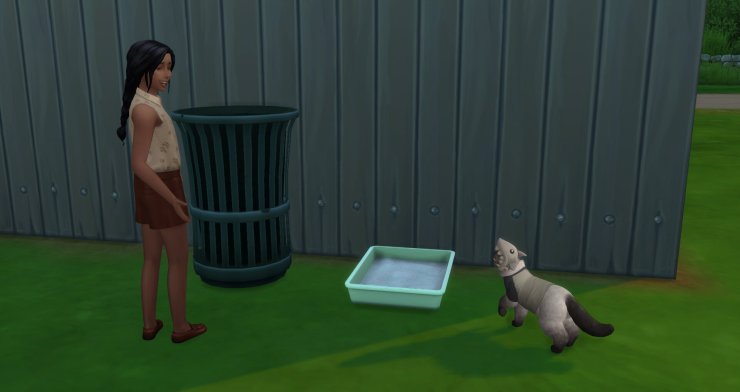 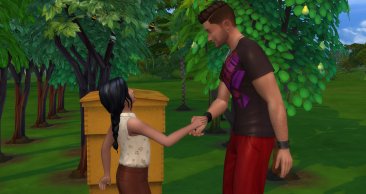 They did this interaction several times.  It said “secret handshake” but I swear to you I’ve never seen this before!  I asked on Twitter but nobody responded with an explanation. 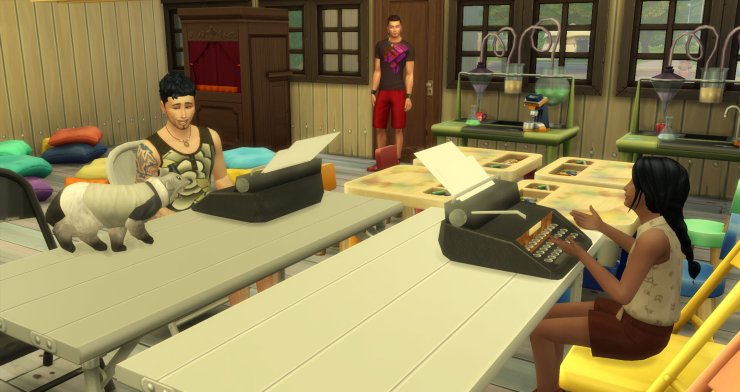 Off to school.  Chatterbox makes himself at home.  Maxwell didn’t mind seeing as how he’s a cat person himself.  Not sure where he and Erick’s cat Rainbow was off to.

That shark hat just cracks me up!  Are we going to start staring at the phone already? 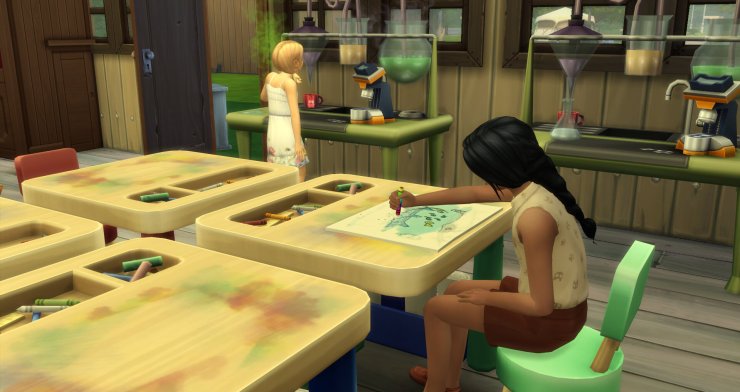 Since they won’t do it autonomously I have been making them do it when I play them.  I had this picture in my head of the walls full of kids drawings.

Vicente lends a hand.  Now, he is a good sim to choose as an art mentor, unlike Lucca who was helping Kyra the other day. 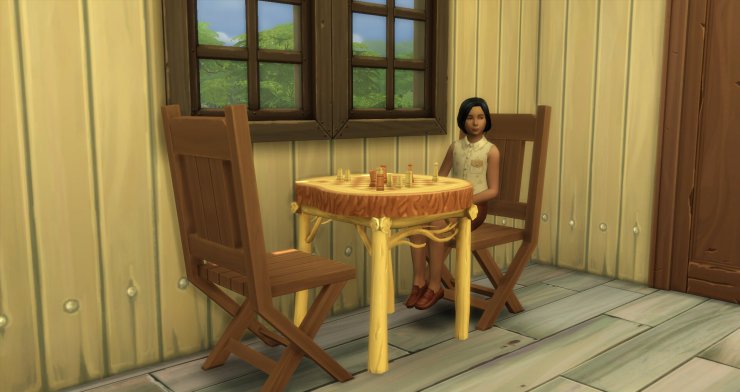 She’s just so prim and proper.

Enzo wandered out to play some basketball.  I need to move the hoop.  I realized that the kids are running back inside while playing it because I guess they’re going “behind” the hoop?

It’s so funny watching them all leave. 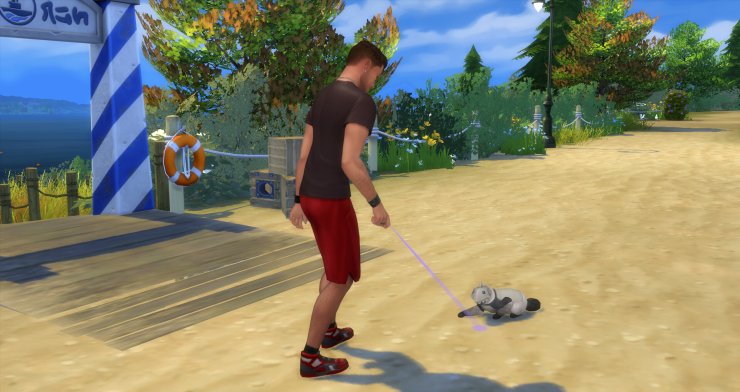 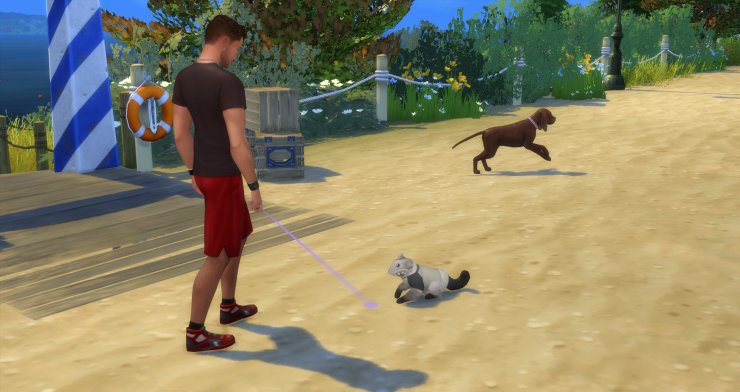 Puddin’!  We know what her arriving means!

Had to remind myself not to get too excited. 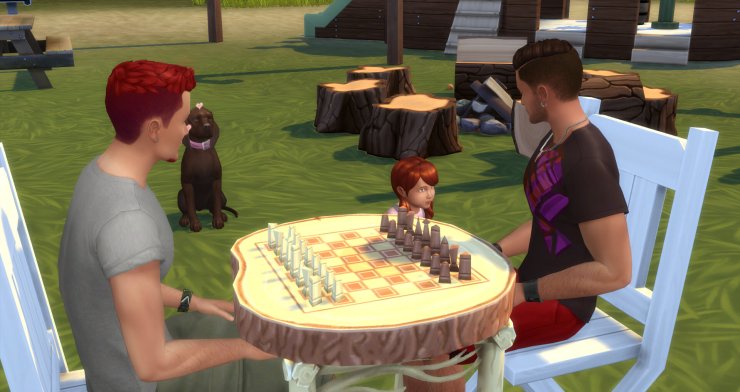 I had him go over and introduce himself to Tobias’s new adopted sister Alayna. 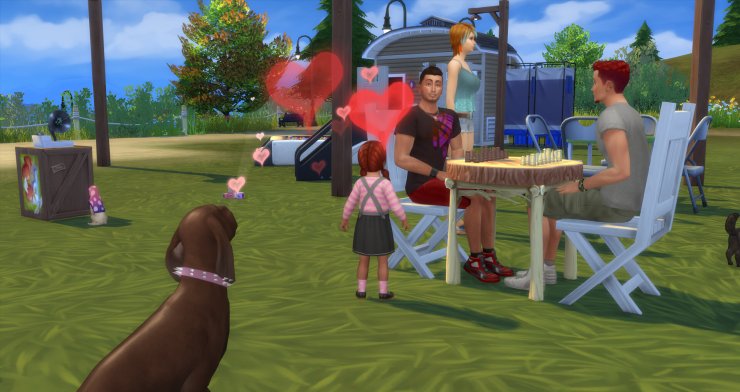 I was very excited.  I believe this is the first time Tobias has ever flirted with him.  It’s always been one-sided.

Tobias is like seriously you’re going to tell jokes now?  I agreed.

Although really, how could you not smile.

Then we had some deep conversations and such. 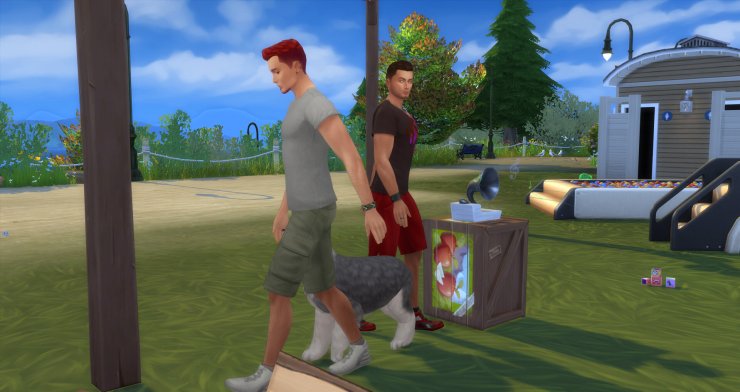 Seriously?  Did you really think this is how it’d end?  Classic Tobias.  He’s been running since they were teens. 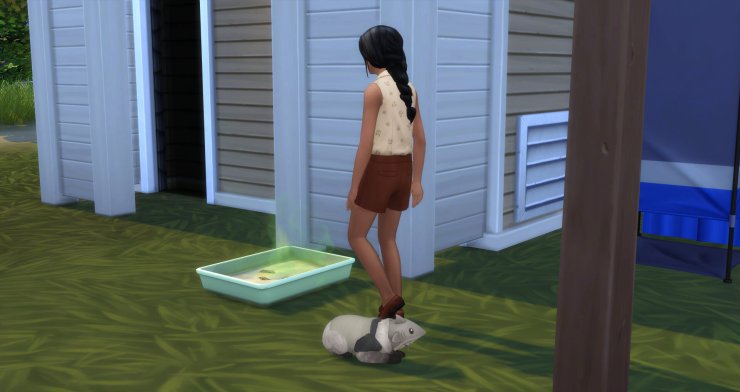 Poor Sierra, whenever Tobias is around I kinda forget about her. 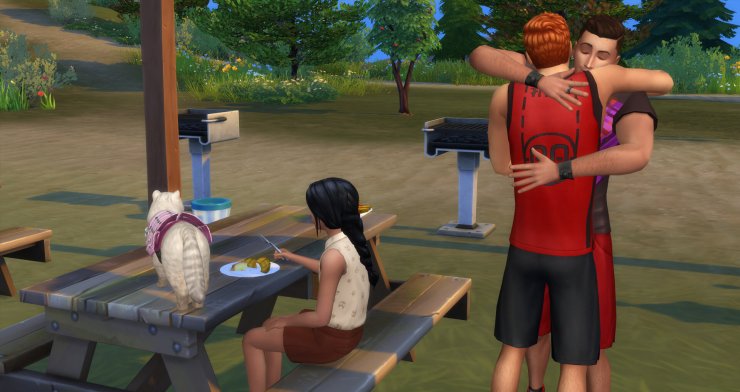 They were getting a bit hungry.  I figured they could eat and I guess go home or something.  A hug from Isaac.  Rainbow’s on the table but I’m pretty sure they taught her not to eat people food.

Are we going to have a samari vs land shark battle? 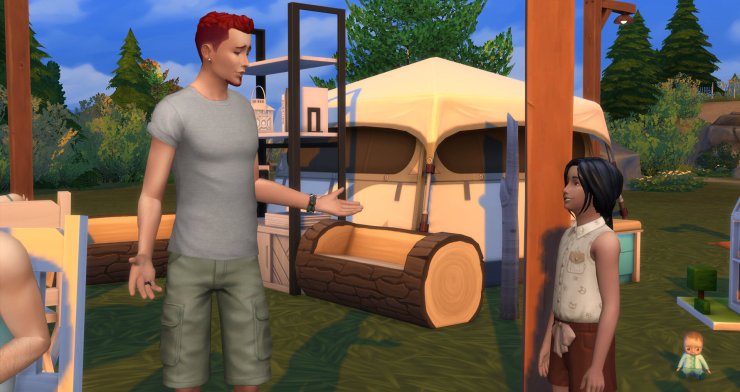 And, he’s back.  It reminded me of that day that Everett left Drew at the park and then returned.  A bit of deja vu there.  Sierra went over to say hi.  Truthfully, I was kinda leary at this point.  I thought here we go I’ll have Enzo go say hi and they’ll talk and joke and maybe flirt a little and he’ll leave… again.

Seriously though, how can I resist?  I’ve been shipping these two since they were like 15.  I’ve never wanted so badly for two sims to get together.

Let the chatting and jokes commence.

A flirt or two.  So, I was thinking.  I mean, the reason I’ve had a hard time trying to go about actually getting them from the best-friends relationship to something more is that neither is very flirty.  It’s not like Isaac and Casen.  Isaac is really high up on the flirty scale.

So I decided maybe they just need to be away from everyone else?  There’s a little fishing area near the park entrance.  I assumed that since they can fish there it would be a screenshottable area.  Not so much.  But, truthfully, I really like how the panned out shots look.  Although, for the first hour or so Tobias was up on an incline so the shots look a bit weird.

They did a lot of deep conversations, getting to know, talking about interests… which makes sense.  Truthfully, I was hoping for mabye a first kiss.  That seems to be the gateway to everything else for my sims. 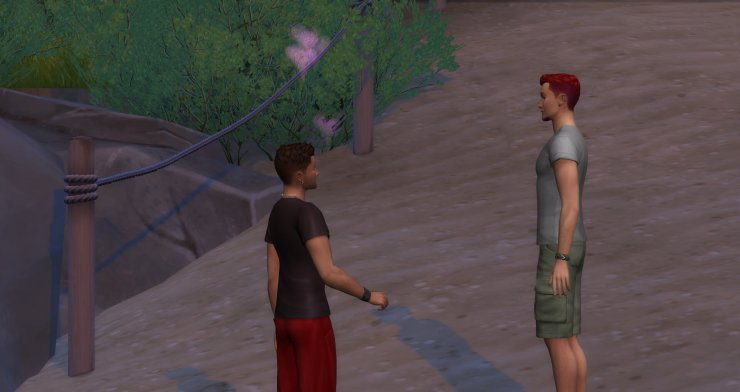 A lot of blown kisses, lol.  You know I had to screenshot practically every interaction. 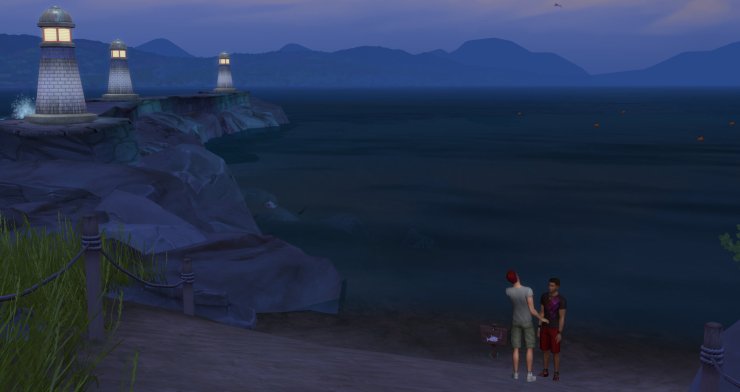 I really love the look of that umm… inlet?  Something like that.

Getting darker.  I was thinking great if something exciting happens I won’t even be able to see it to screenshot!

Looks like Maxwell decided to keep an eye on Sierra.  She’s almost 11, she’s okay.  She went home a little after this.

Looks like he’s telling Tobias about Isaac asking him about woohoo!

Horrible screenshot.  Eh, well, you can’t win them all. 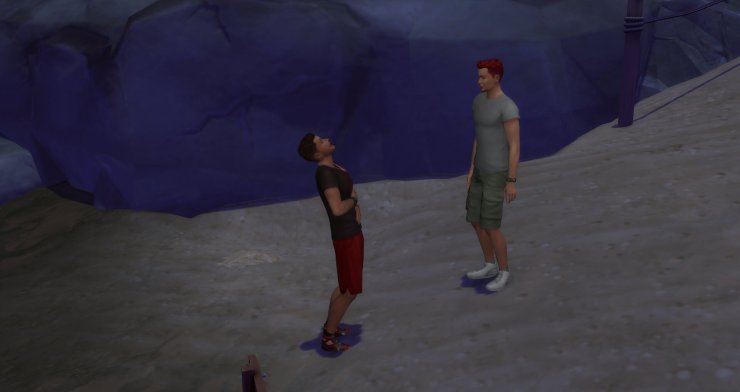 Lights!  From nowhere!  Hooray we can see! 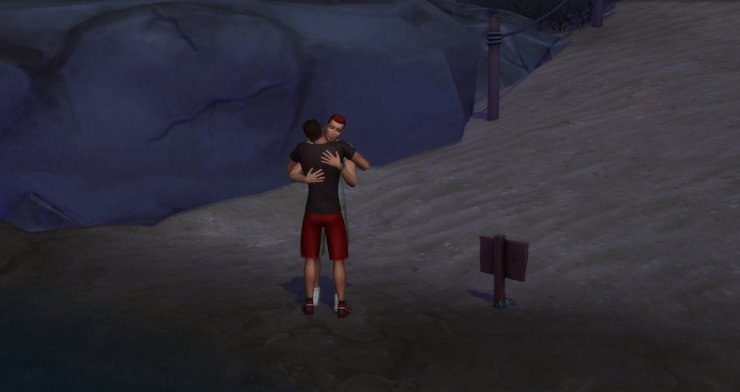 I finally had the absolutely genius idea to control him and have them hug.  They finally went onto level ground.  Sheesh.

I’ve been calling it the Saga of Enzo and Tobias almost from the start.  And here we have the continuation.  I have no words… 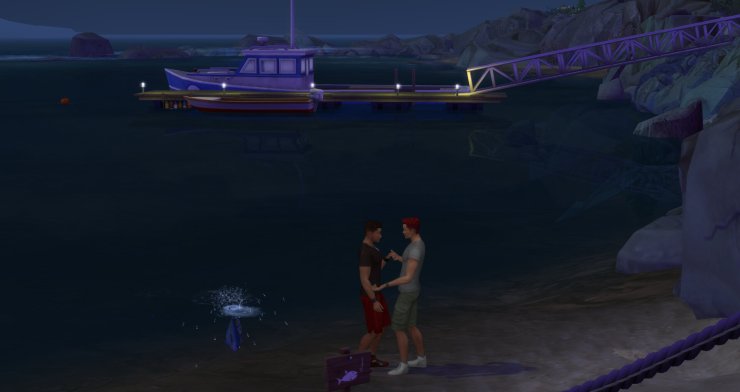 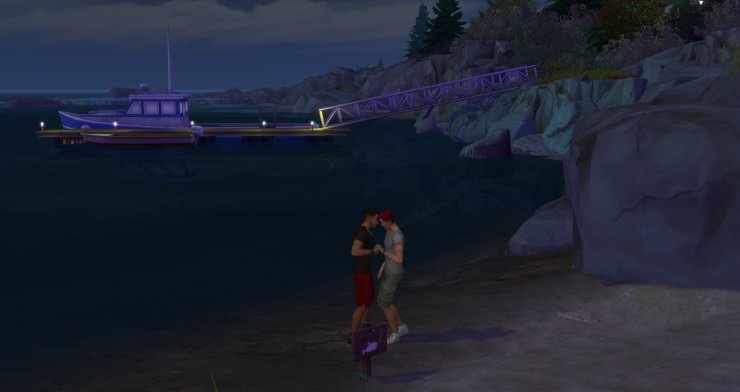 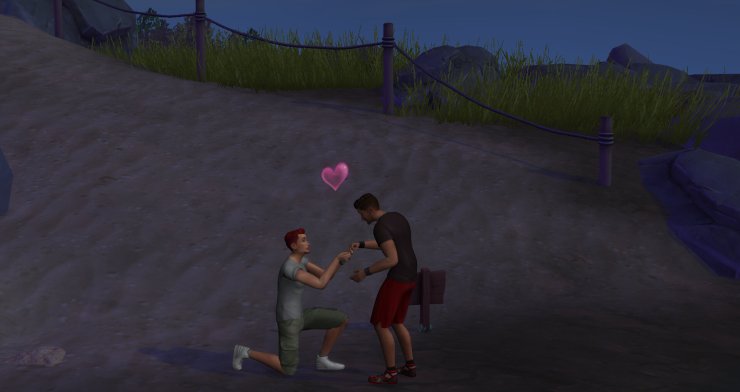 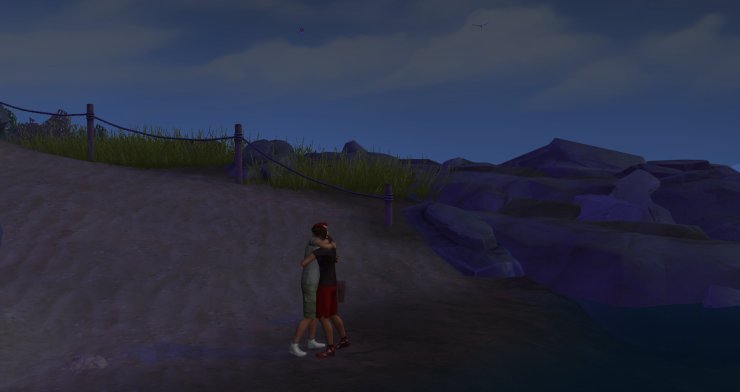 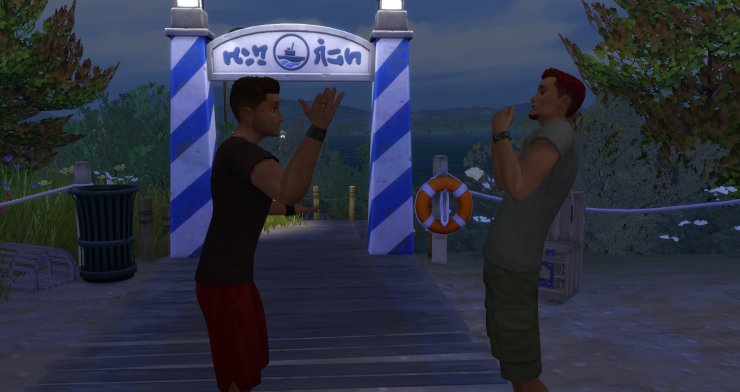 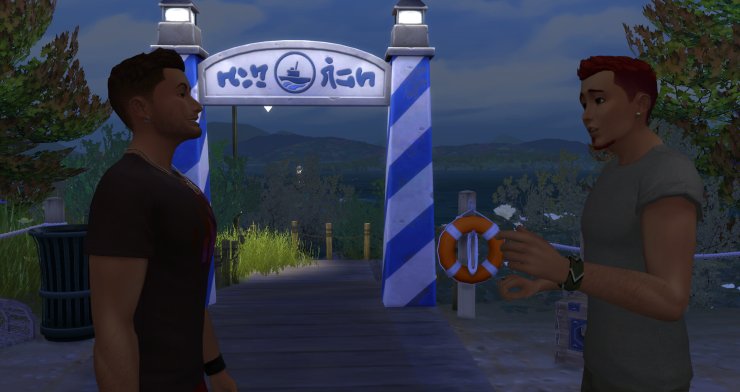 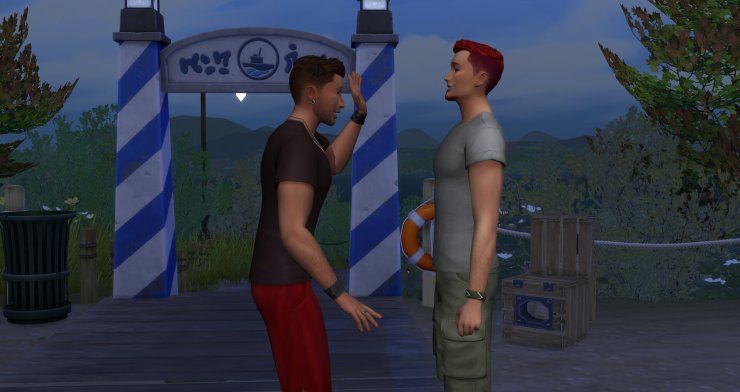 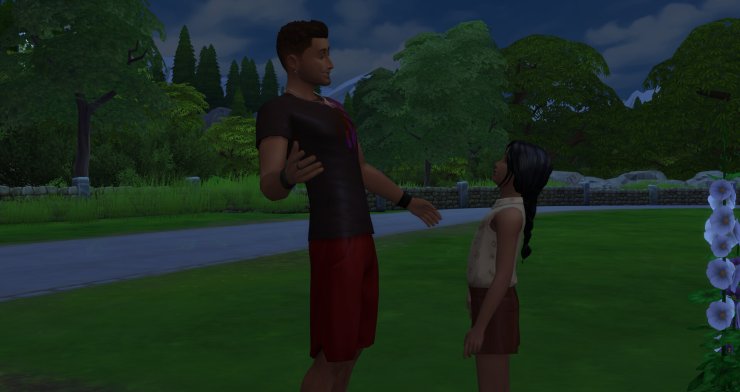 Just seeing the screenshots I’m crying again.  I swear I have never been so emotionally invested in two sims.  In the last month I have probably taken over a hundred screenshots of them.  Yes, it’s been more than a month.  Time goes slow in Ash Shore.

Thinking back, it was Enzo and Tobias that changed my way of doing things.  When I sat down with that list of personality profiles to see if any of the townie kids were matches for Tanya or Brock I looked at the girls for him and boys for her.  It was only the fact that their profiles were one above the other and so similar that I kept mixing them up that even made me look to see out of curiosity what their number would be.  I was blown away.  I still haven’t found another match as high as theirs.

After that, I started doing the profiles without names.  I’ve always felt that a person is a person no matter their age, race, sex, whatever.  We are who we are on the inside.  Our culture or whatever shapes us sure but a good person is a good person.  Cut us and we all bleed the same.  Changing the way I’ve been doing things has been hard for me.  I’m still freaking myself out every single time I put anything like this on Twitter.  Some of you might have read my total breakdown over all of this after Isaac was matched with Casen.  I deleted it a few hours later so not likely many did.

I have “Just Be” tattoo’d on my wrist.  I keep telling myself just be yourself who cares what other people think and I have no idea why I’m so self-conscious about having so many same-sex couples, or feminine guys, or a trans sim.  I think it must have something to do with how important all of these sims have become to me now.  I’m afraid people won’t understand or will get the wrong idea… I don’t know?  But, I refuse to let it ruin this for me.  I really believe that these personality profiles, chemistry matches, and leaving them autonomous has given my sims life.  These unique individuals who guide their own stories that I get to watch and document.  I have no idea why I’m writing all of this.  I’m all emotional still.  Time to stop the rambling.  Here, enjoy some extras… 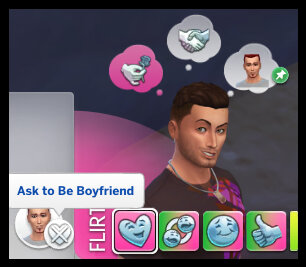 The hysterical one was just as they were saying goodbye one of them told a joke.  Good thing I have emotional deaths turned off eh?  Okay, time for me to go cry some more.  I don’t think anyone could possibly be as happy as me but I hope some of you have been cheering them on along with me.  Now, we have a wedding to plan!