It’s that time again.  Heights and ages and… adoptions!  While doing Vicente’s height (17 1/2 omg!) I thought to myself it’s too bad that Alvin and Kierstin are adults since immediately after they got married they had a whim for a baby.  And I also thought it’s so funny that they’re all redheads.  And this led to me thinking of little Alayna still needing a home.

I feel like doing the adoptions that way isn’t going to work.  I thought it would be fun and it was with Hayden but I felt so sad for the other two!  I’m not really sure now.  I’d felt like it was only fair to have children and teens also in the adoption rolls but at the same time, I feel like I have too many children and teens already!  After some more thought, I really like the idea of adoptions since the problem I almost always have is that after a few generations most of the sims are related to each other by blood.  If anyone has any thoughts I’d love to hear them.

More height adjustments.  Sierra’s almost a pre-teen!  This annoys the heck out of me.  Every single child household I go into is in the street playing with a toy!  And, if I leave the household without making them go back onto their lot with the toy it’s stuck in the road saying they don’t own it!  Sierra, the toy isn’t in your hand hun.

And lastly, before the party, another twinsies outfit for Hayden and Butter! 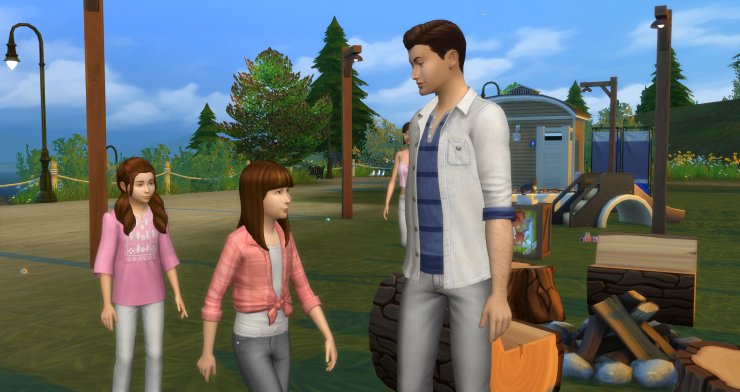 Our birthdays this ’round are Reece Buchanan and the Burton twins Skylar and Scarlett.

I had a hard time deciding just who to play for the birthdays.  I didn’t want to merge more than 8.  The lag at parties is already usually pretty bad without having a large household.  In the end, I did Demetrius, Reece, Casen, Taylor, Scarlett, Skylar, and Darren.  The rest of the family were invited except I felt Libby should be home with the baby.

I forgot to change the lot to generic at first so Butter was there. 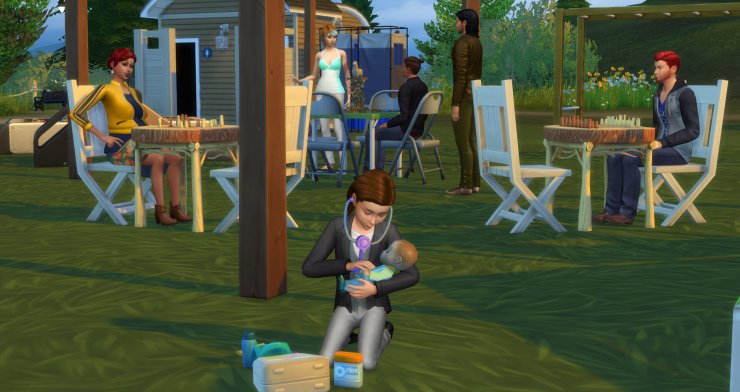 I love it when they play with the doctor set. 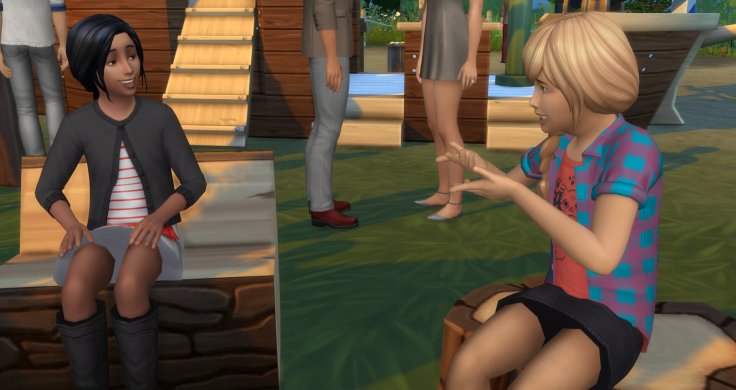 Shhh… it’s so I can have early pics of them together for… scrapbooks or something.

Chatting about the new little sister/grandchild?

This chapter’s going to be sooo long if I keep captioning them all.

Look who’s in her third trimester. 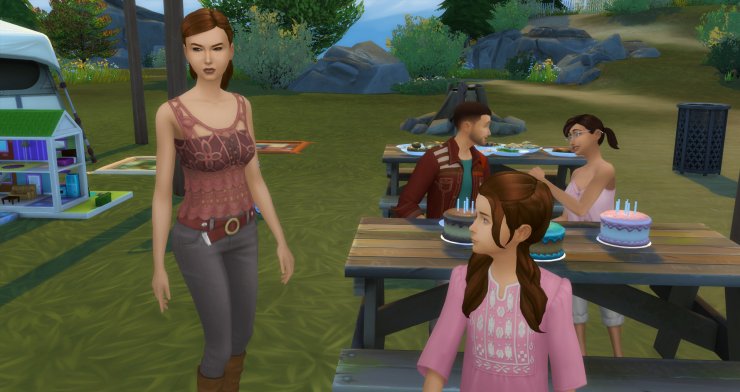 I realized that Reece’s girlfriend Summer wasn’t there and had him call her.  That’s the problem with not upping the “sims in zone.”  Not everyone can be there at once.

No, they’re not talking.  Just standing by each other… again. 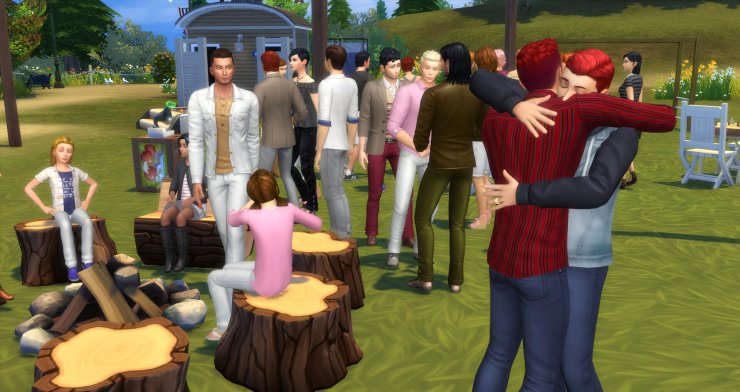 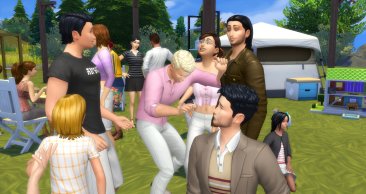 I was trying to get a pic of Drew and Everett dancing together but Aubree was like right in the middle of them.  Then, I realized… the girl is a genius!  What safer place for a young girl to dance than surrounded by gay men eh? 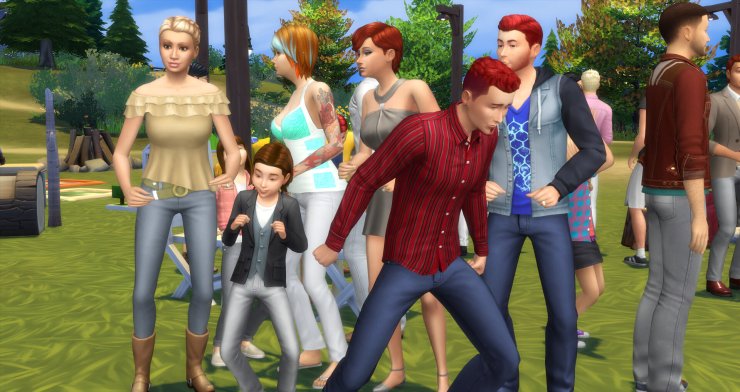 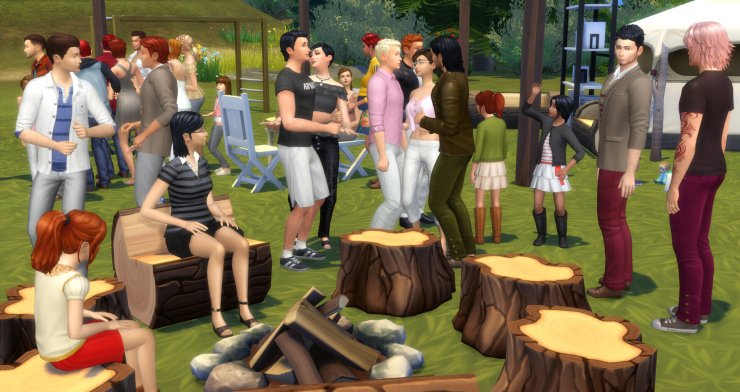 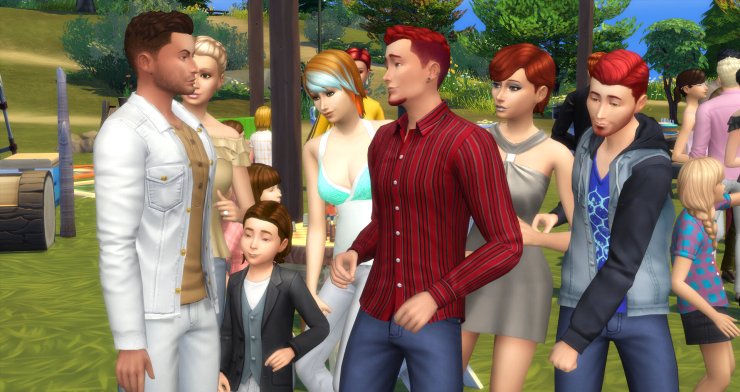 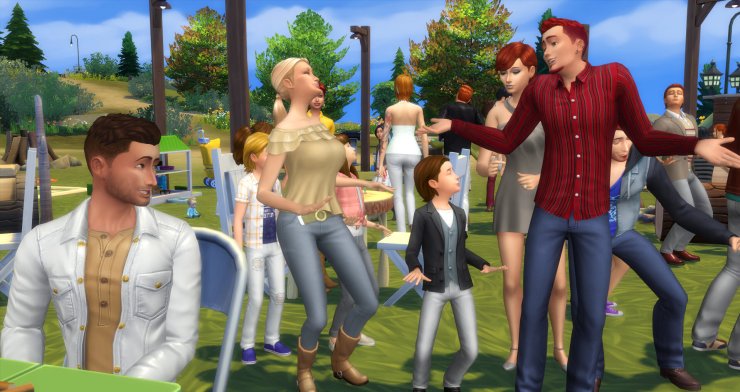 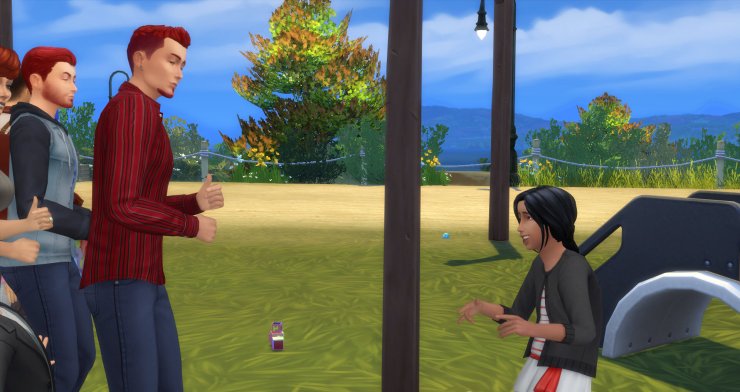 Sierra really?  *sigh*  I still haven’t figured out what’s going on with my group conversations.  Almost every time that someone else cuts into the conversation it ends it with the first sim.

It was really difficult to be playing Casen’s household and resisting having them talking the whole night.  But, it’s more fun autonomous so I did. 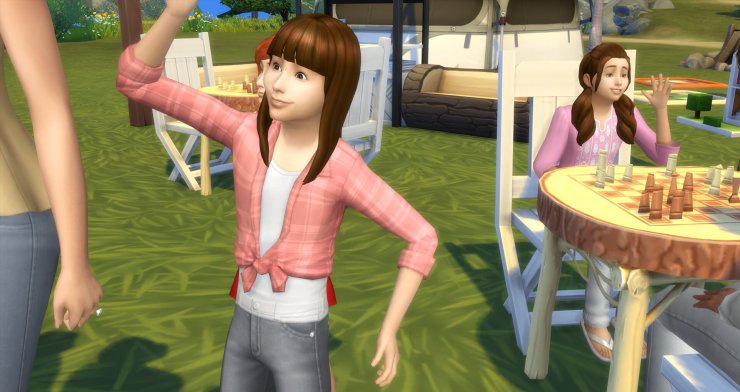 Another birthday girls pic.  I was glad I took this because, apparently, the beauty marks disappeared when she aged up!

We interrupt this dance-fest for the birthdays…

Reece first.  Why are they all kneeling? 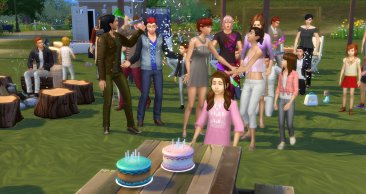 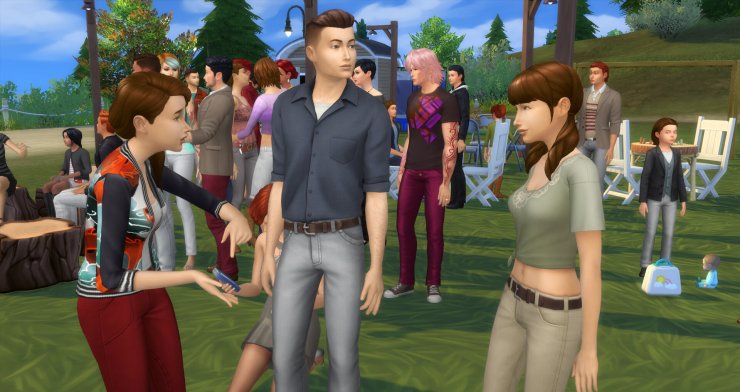 After pics.  Scarlett on the left Skylar on the right.  I kept the pigtails to make it easier.  Also, looking at their personality profiles again while doing their makeovers reminded me that these two are complete opposites!  I swear Skylar got every single bad trait that her moms have!

Alright guys, as much as I’d love to add your families to the rotation I just can’t right now so let’s make this count.

Not bad.  I was pleased.

Always writing in his journal.  I think it’s because he’s gloomy.

I forgot they were still back there.

I guess the new baby has tired Demetrius out?

The thing where everyone stops whatever they’re doing to watch someone play with a toy is wearing on my nerves.

Umm… why are we so happy about the bathroom? 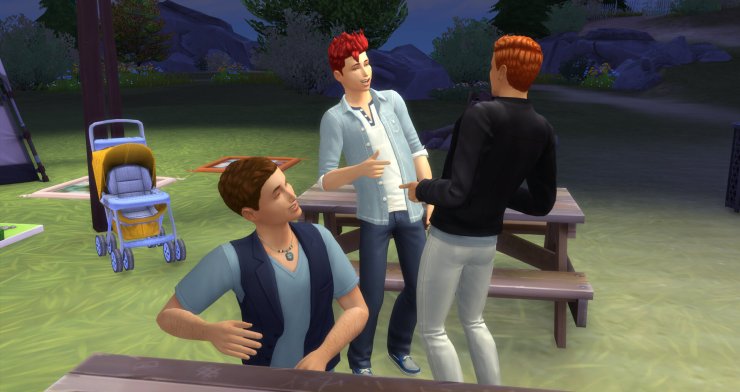 I realized Vicente wasn’t there and had Casen call him.

Summer left and Reece was exhausted so I sent him home. 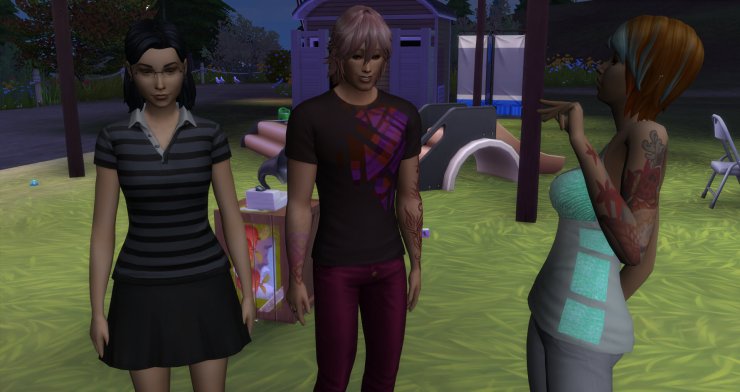 She looked so miserable I sent her home too.

They look so different without their earrings and makeup.  Vicente actually looks older.  Which is weird because before his makeover he looked super young.  Maybe it’s the height? 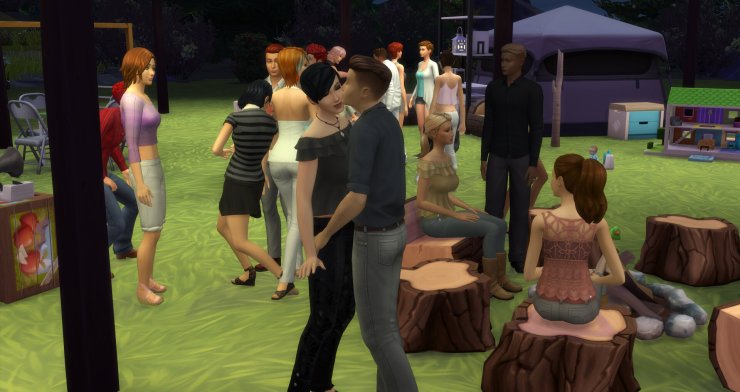 Summer returned so I called Reece back.  He immediately walked over and gave her a kiss. 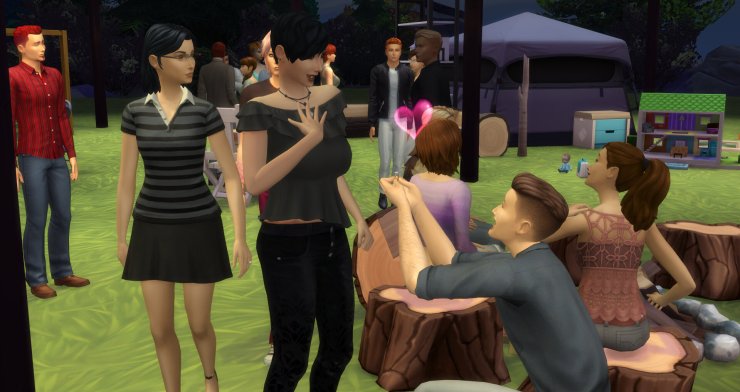 Ohmygosh!  Completely unexpected!  They didn’t even have a full romance bar! 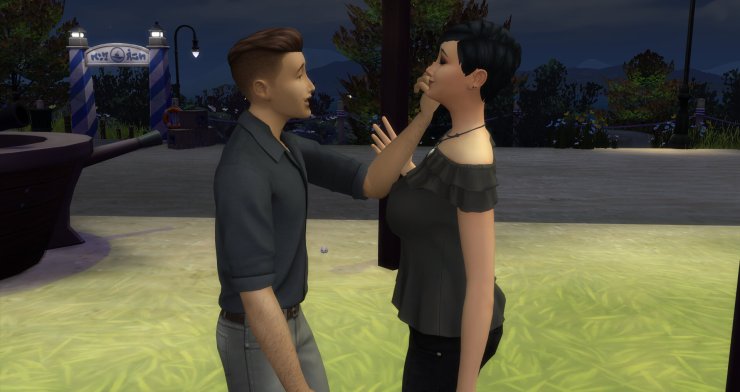 So sweet.  When it’s right it’s right I suppose.  I need to figure out living arrangements.  Lucca ages up next round but I feel bad leaving him alone and the Buchanan’s have almost a full house already!

Casen went over to congratulate them.

Awe.  These two are turning out to be favorites for sure!

Whatever she said I’m sure the butt-kicking was deserved.  I’d thought her father Kenneth was a jerk but she’s 10x worse.

Lucca stormed off and I sent Kiera home seeing her acting all injured and upset annoyed me.

I saw this later and it cracked me up!

I think Vicente was impressed.

I’d completely forgotten the big brother/little sister relationship that these two have had from the beginning with her getting married and all.

I actually managed to get a pic of Lucia with one of the girls.  She and Taylor kissed a few times and I tried to get a good pic but no luck.  Everyone stands so closely together at these things!

Boogie down.  That boyfriend whim was driving me nuts.  After doing the Whim Challenge and others like it I have a hard time not granting their every wish… especially when I want it too! 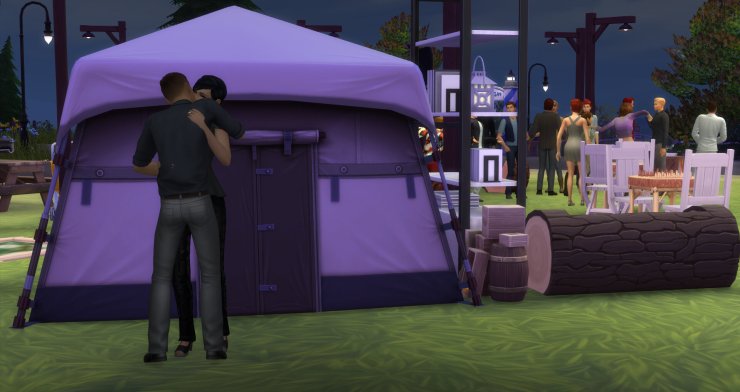 A little alone time?  I think she was trying to sleep in the tent again.

Both of them have such expressive faces.

Ah well, it’s getting late.  It was a fairly eventful day/night.  Between the party pics, pausing because of lag, and the makeovers this took hours!  Remind me not to do parties right before bed.  I was up until 2am!