I decided to do the second half of the day after Alvin and Tobias with Tanya and Cecilia because, frankly, it was extremely boring last time I played them.  It started just like every other time I play them.  With Tanya digging… 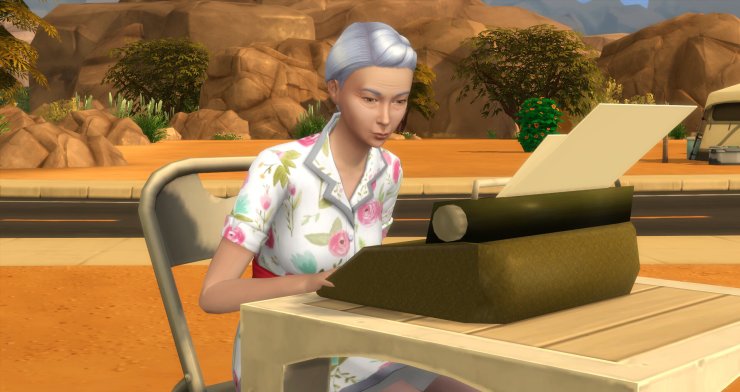 When they went to the park because Cecilia was hungry I decided to have them invite Stephon along.  Seeing as how he doesn’t have a pet the likelihood of him showing up now that they’re finished with school is pretty low.

I was thrilled to see Michelle there with Snoozer!

And then I saw Jitterbug as well.  I was almost too distracted and missed this… 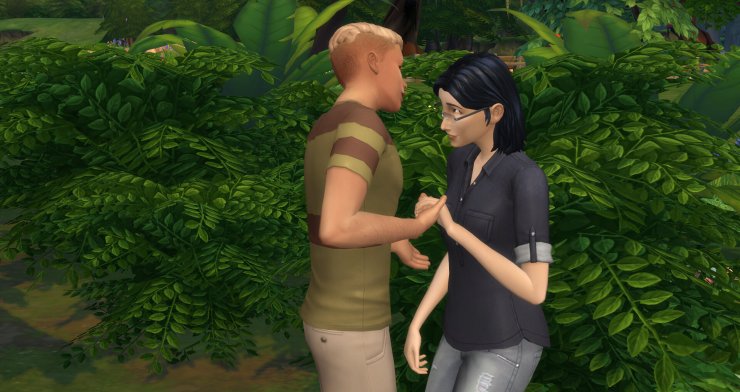 Awe, so sweet.  They’d gone to the back of the park for some privacy.  Since they’re both loners they were tense.

Ohmygosh Tanya!!!  I didn’t expect this at all!

They returned to share the exciting news with grandma. 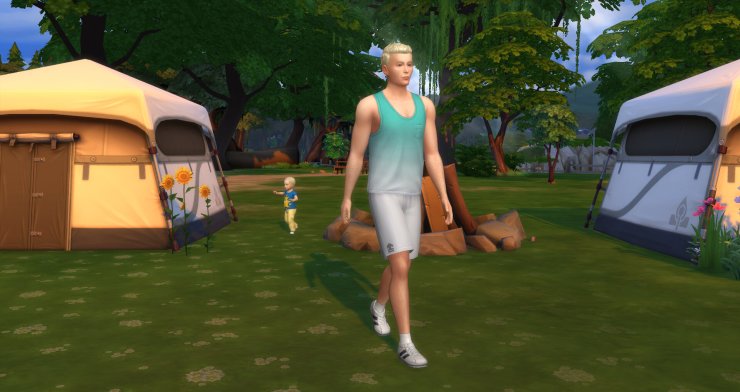 And I was distracted by Everett with now 21-month-old Hayden toddling along behind him.

No surprise that Butter was there as well.  They really need to train him not to eat people food!  Nobody at the table seemed to notice in their excitement. 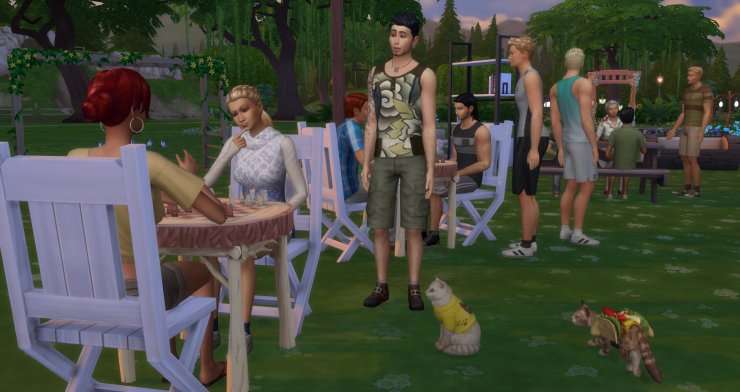 Maxwell was there with Rainbow.  Awe man looks like Rainbow is about to get initiated into the catfight club.

Welcome to the catfight club Rainbow.

I’ve decided to take this as my sim’s cue to go back to their home lot. 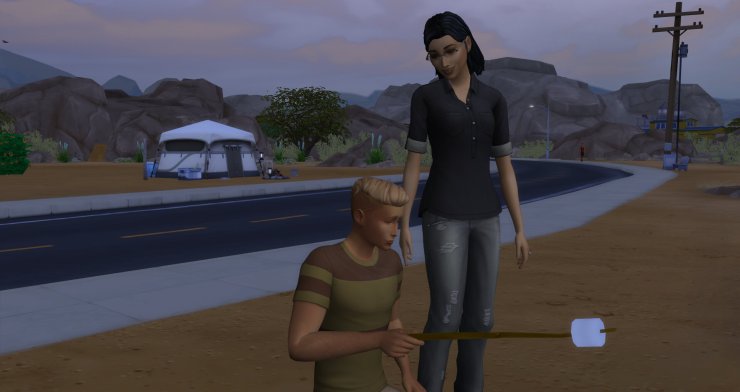 It was too sweet of a pic not to take because of the marshmallow that shouldn’t exist.

They’re adorable and perfect for each other.  I’m so excited to have them start their life together.

Never happened.  They were too tired.  Stephon went to sleep in the tent with grandma and Tanya passed out in the bush.  They need a bigger tent… or not?  Hint, hint.

Welcome to the most confusing day ever.  It started so normally with Judy cooing over baby Keane while Layla and Fish played. 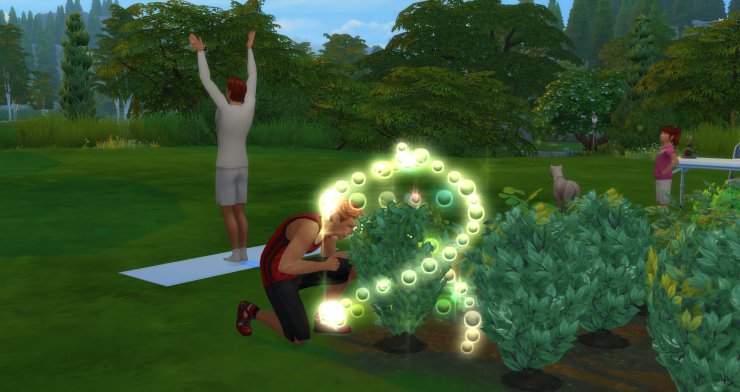 Dean seems to be into the whole zen thing which is good considering I’ve decided to go along with Laura from Postcards from Sierra Nova’s way of determining health.  One of these is having wellness skill.

Time for school and we see adorable Rylee with Siggy in their new clothes. 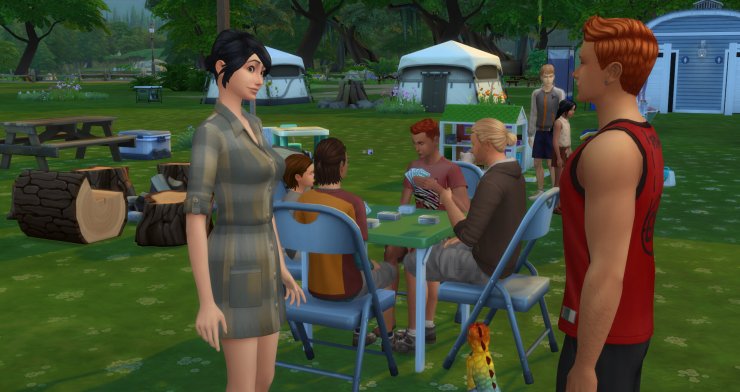 I noticed that both Summer and Reece were at the park and Isaac is friends with them both.  Time to implement project matchmaker.

So hey Summer, I think you should meet Reece over there.  He’s a nice guy.

She immediately goes over and introduces herself.

Isaac suggests they would be good together. 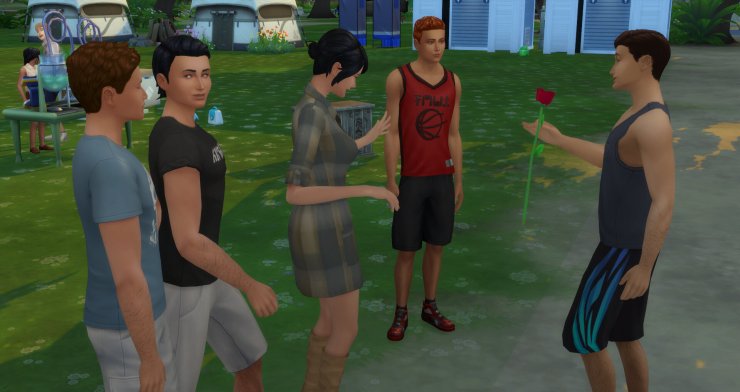 Reece, it’s up to you buddy!  Will she accept the rose?  As if this wasn’t awkward already both of their brothers come over to watch!

Ohmygosh this is awesome! 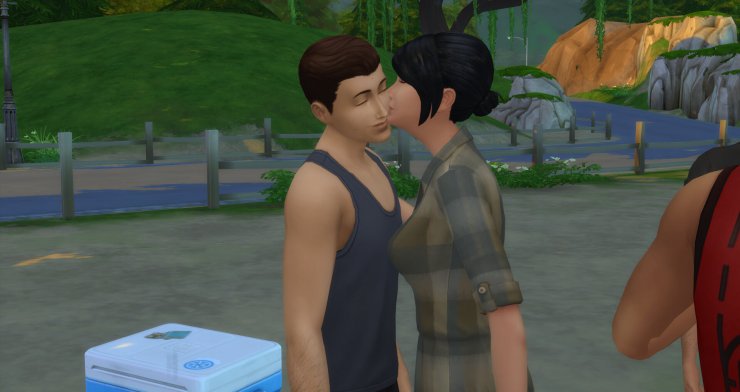 Checking in on Layla she’s having a chat with Fish.

Vicente: Are you ever going to talk to him? 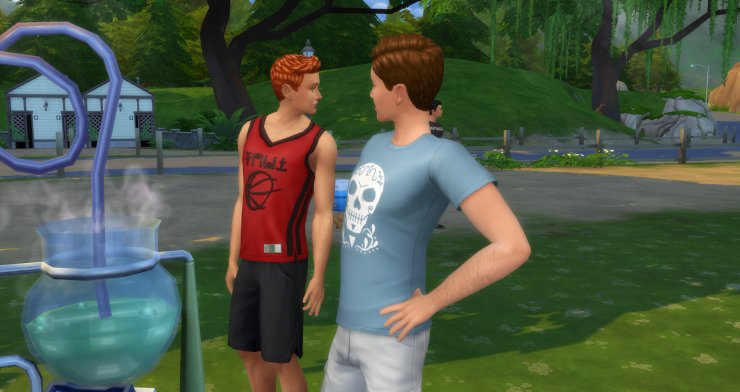 Who knew Casen was so confident.  He just stood there like he was thinking the same thing while Isaac pretended to ignore him.

Then he got this silly look on his face.  And I’m thinking why the heck is he not talking to him?  I’ve seen them talk before.  I have pictures of it.  And so I thought I’ll just initiate an ask about day or something.  And, they don’t know each other?  What?

Note from the future: I discovered like a month after this that the game was culling relationships and think this must have been what happened here! 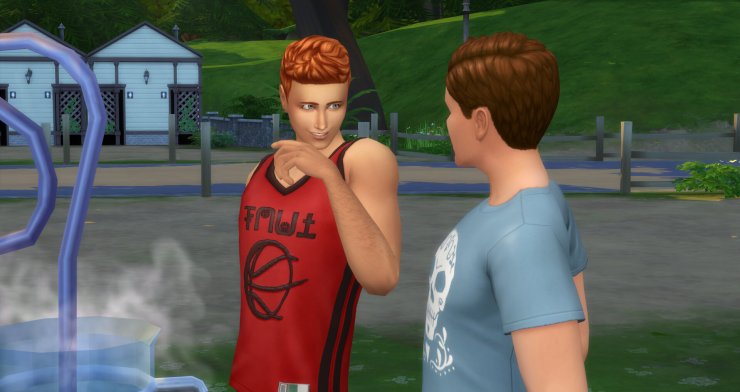 So, taking the fact that Isaac is really high up on the flirty scale, I thought how about a flirty introduction?  Maybe they might autonomously flirt someday, wouldn’t that be cute?  Que the weirdness that had me saying what just happened over and over again. 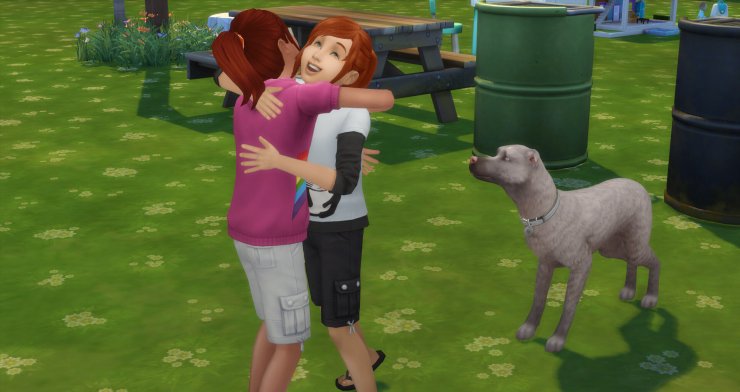 Figuring I’d leave Isaac and Casen to their chat, I mean really how exciting could it possibly be?  I checked on Layla as she gave her bestie Kyra a big hug.  Fish didn’t seem too happy though.

So she took him for a walk.  So cute. 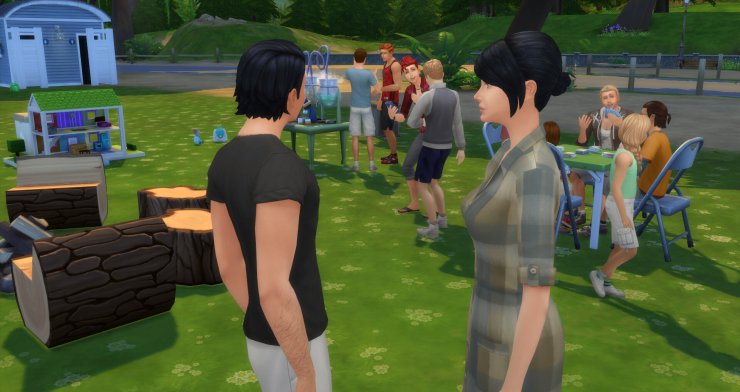 The practically inseparable brother and sister look like they’re chatting about Vicente. 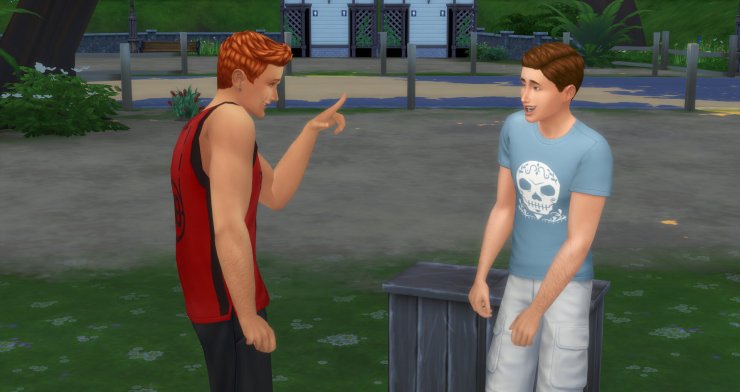 And then I see this in the background.  Ohmygosh!  They’re flirting?  Already?  Also, so freaking cute!

Back to Layla and Fish.  She looks so proud! 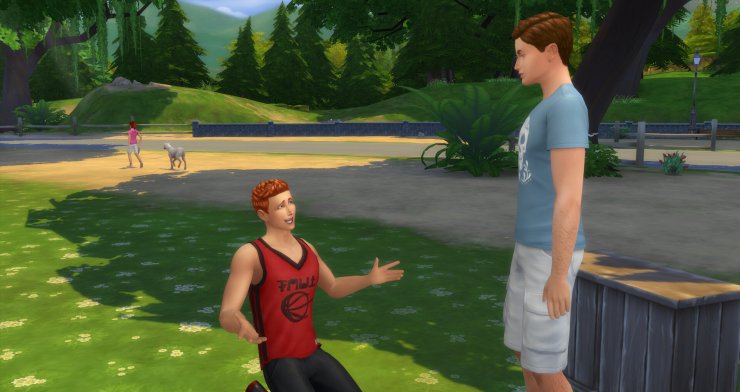 Am I giving you whiplash switching around?  Me too!  But this was just weird and I couldn’t stop taking pics!

And then they became 10x more adorable when Casen kneeled too. 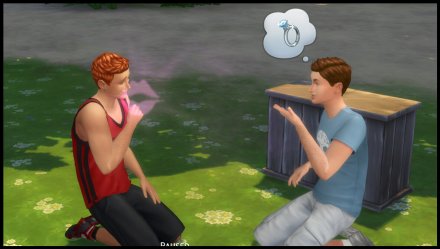 And they started majorly flirting.  Like, with most of the sims I have to wait forever for them to get even close to this amount of flirting.  And a ring?  Wow, Casen moves fast.

Layla returns and seems to finally take notice of her brother.

Oh, I gotta see this.

Boasting about messing around?  Hmm… I highly doubt that Casen. 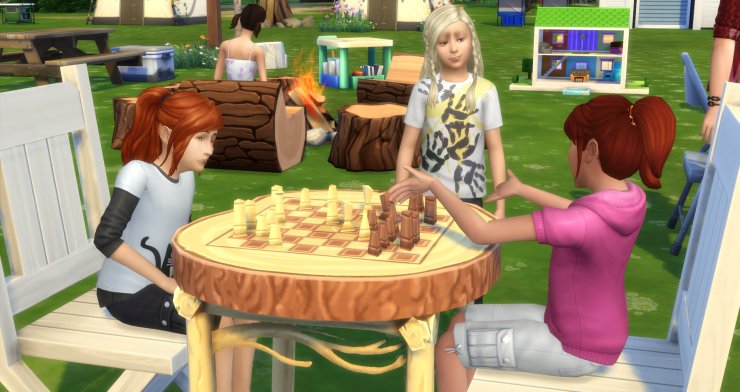 It looks like Kyra isn’t pleased that her bestie is chatting with Hannah. 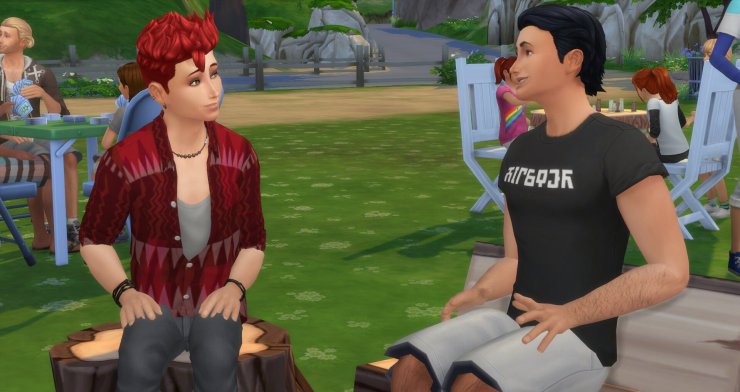 Oh good, they’re finally talking.  Although, I don’t think I can take much more cuteness today!

Wow.  I mean wow.  Just wow.  What the heck just happened?  I have him do a flirty introduction.  That’s it.  I never prompted one more interaction after that and they now have a full friendship and romance bar.  Casen actually rolled fairly low on the flirtiness scale.  I’m thinking I may need to find a new way to determine that.  I have no clue how though.

Isaac and Layla return home and Isaac goes for a jog.  He needs to get all that flirtiness out of his system for now.  Layla informs Dean and Judy that she thinks Isaac has a boyfriend.  I don’t think they believe her. 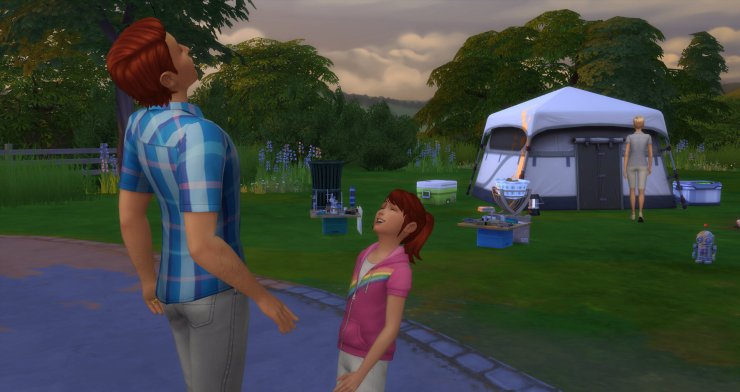 And then Layla tells Dean what she saw and they have a laugh over it.  New mommy Judy goes to take a nap letting the siblings have their fun. 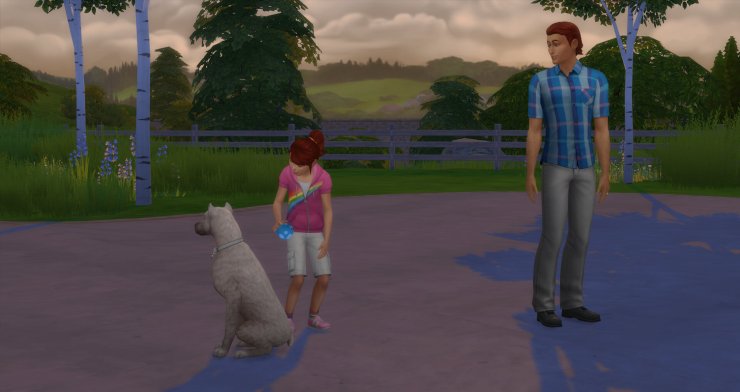 A little fetch with Fish to wind down after the long crazy day. 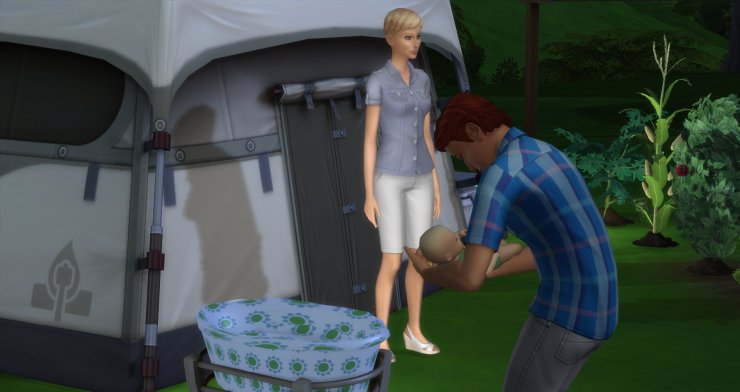 Keane’s crying woke up Judy.  No worries, daddy has him. 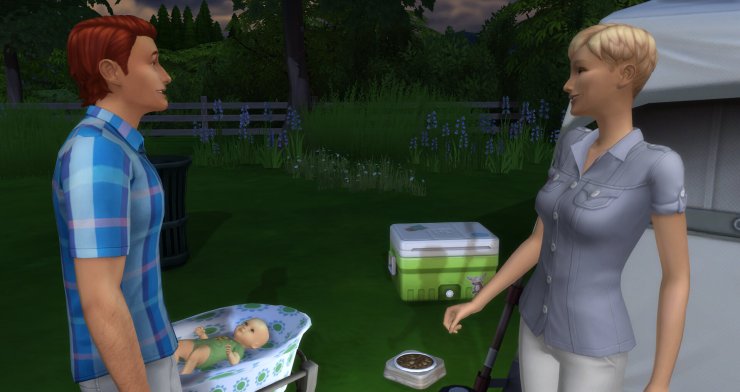 Oh gosh, if you two are going to start flirting too my head might explode! 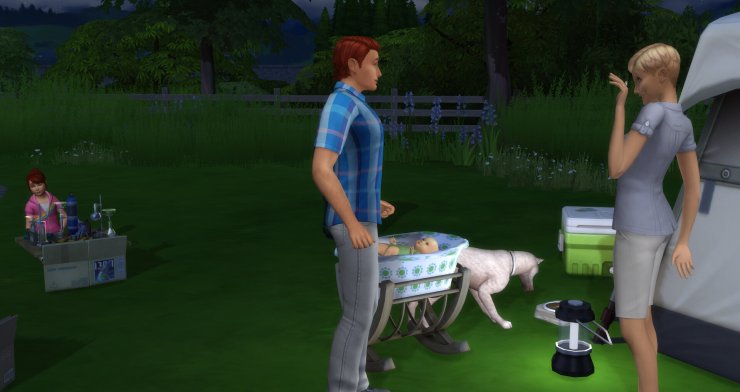 It didn’t last long thankfully.  They were both really tired.

And then when Keane woke everyone later they were hungry so Isaac was left with baby duty.

I don’t think he minds.  This whole day was just surreal.  It doesn’t end here either. 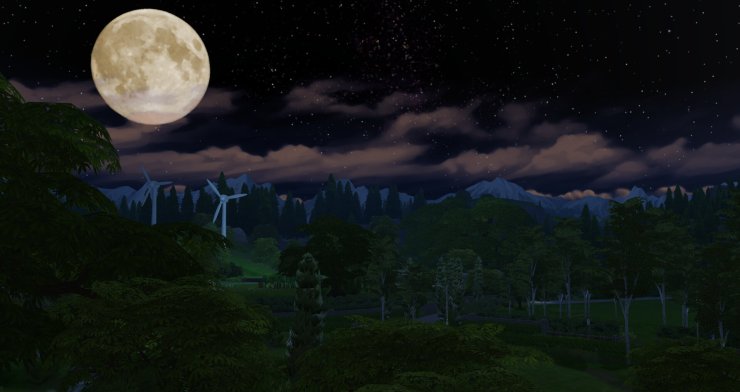