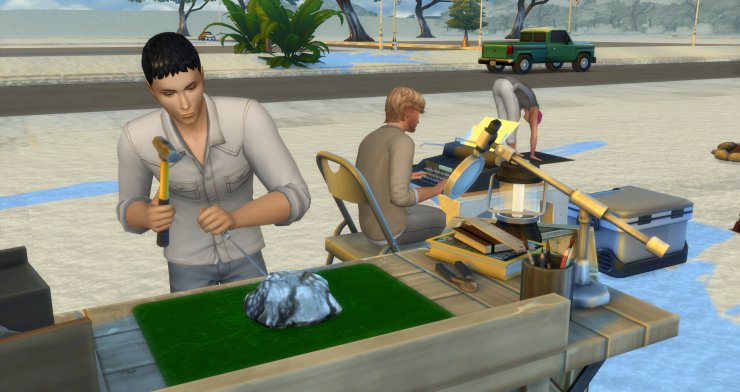 The loss of Drew was palatable in the guy’s camp.  From the lack of his herb garden to the quietness of them all.  Truthfully, I’d never dreamed that it would take everyone this long to match up.  I thought I’d be rotating 6 households just a few times!  But, letting them do it themselves takes longer than forcing it the usual Sims way.

Once Mack had extracted a few more elements they all headed to the park for school.  Darrell had little Rylee there and Erick made a beeline for the toddler. 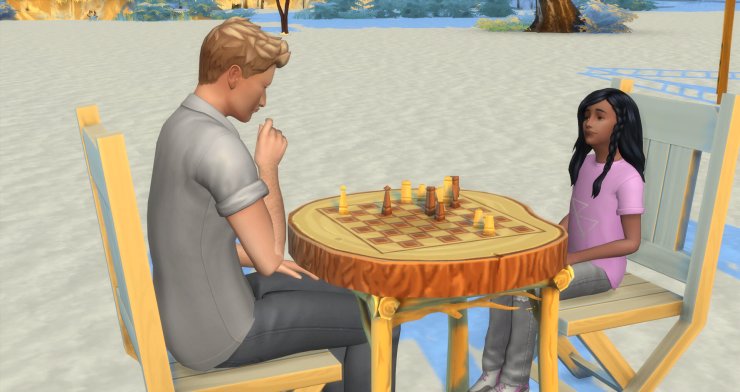 I noticed Sierra playing chess with him.  He’s such a great guy I really hope Naomi can make it work with him. 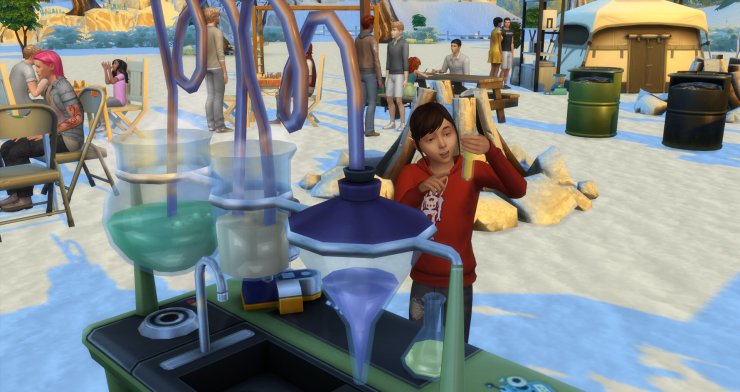 Kiera is getting so big!  Her birthday is next. 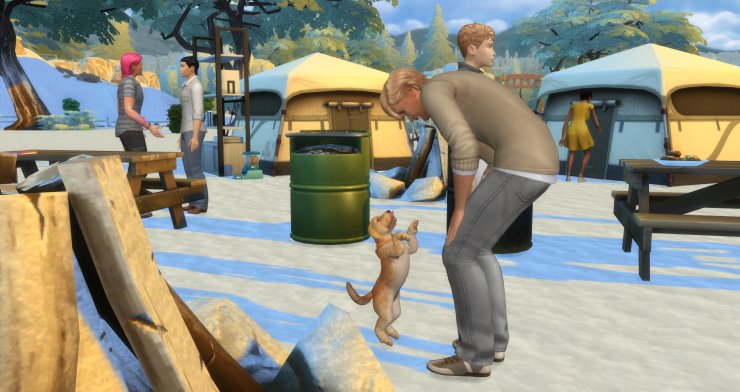 Little Siggy is adorable and seems to be a permanent fixture at the park.  Try as I might I can’t seem to get a grasp on what makes the game send certain sims and not others. 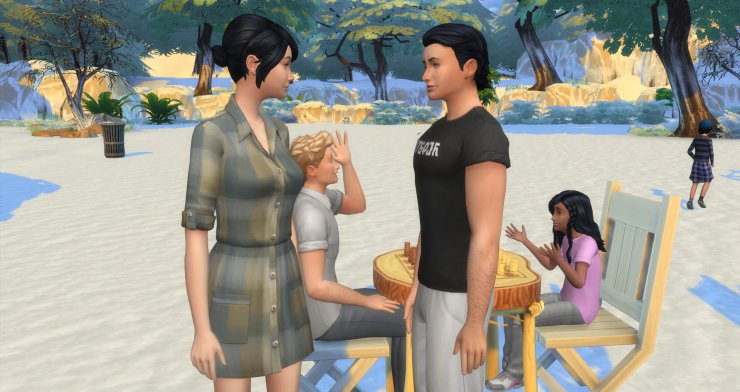 When adjusting heights, I decided to give Lucca a new look.  He looked so old in that shirt he was wearing before since he has such a broad frame.  His sister Summer is absolutely perfect on the other hand.  I can’t for the life of me remember if she had a chemistry match or not but I think not.

Elsa arrived with Khaled and Mack went over to talk aka flirt. 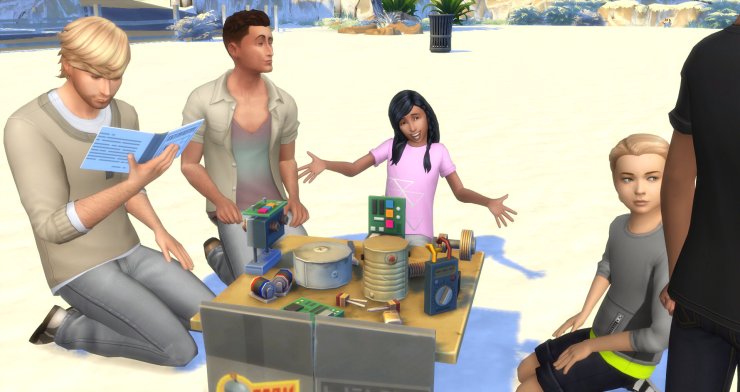 Erick decided that Sierra deserved a bit of extra attention to get her mind off of everything going on with her uncle leaving.  Since her brother Enzo was there he helped her too along with Stephon’s little sis Tanya. 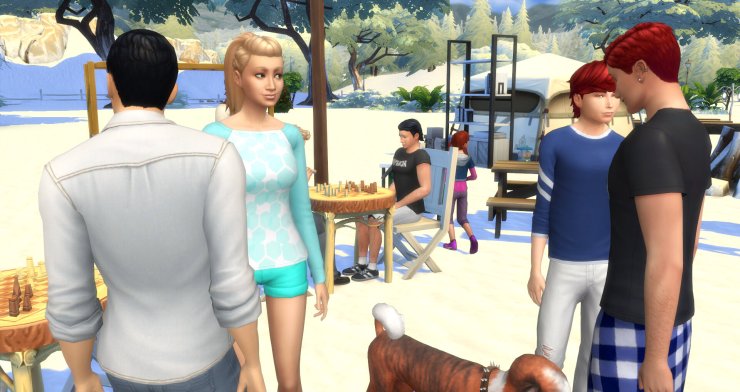 I feel like Elsa and Tobias have become confidants.  I notice them giving each other knowing looks or sitting together talking conspiratorially. 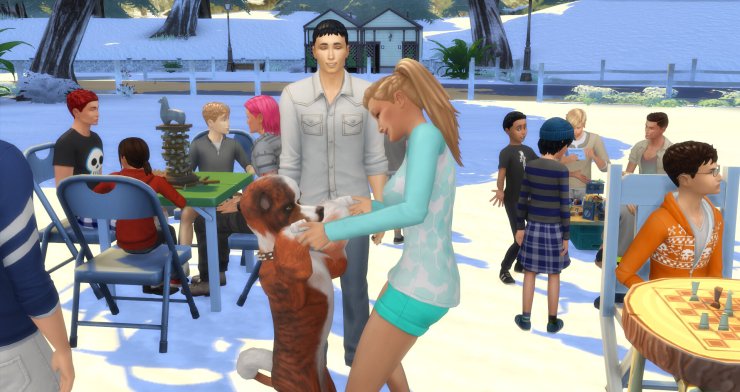 Khaled is so cute!  I wish they’d hurry up and get together so I can see more of him! 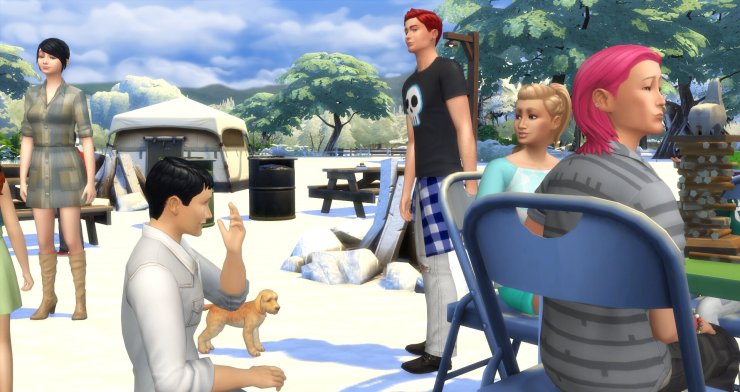 I’m not sure why my sims kneel so much but it’s adorable especially when they’re flirting.

Sierra’s project was complete.  It’s one of the only good ones that anyone has made so far.  She was allowed to take it home with her. 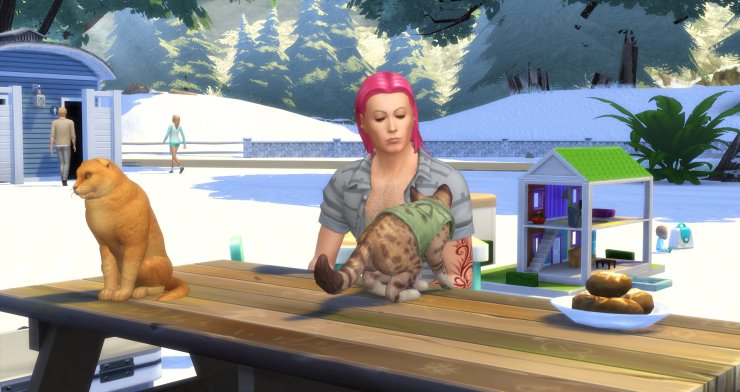 I can’t really tell what Christian is thinking here but I found the look on his face amusing.  Elsa left so they all tended to any needs and headed back to camp. 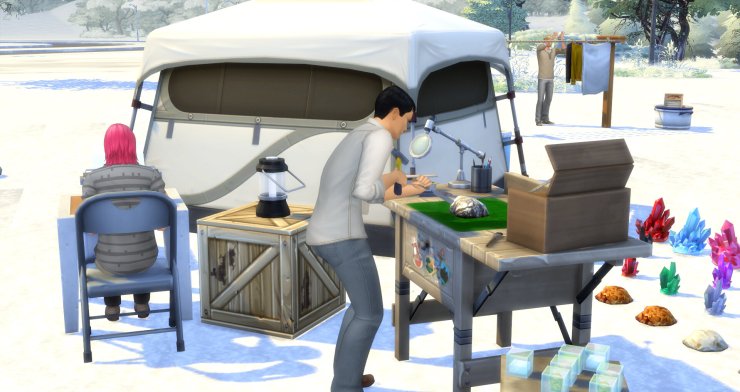 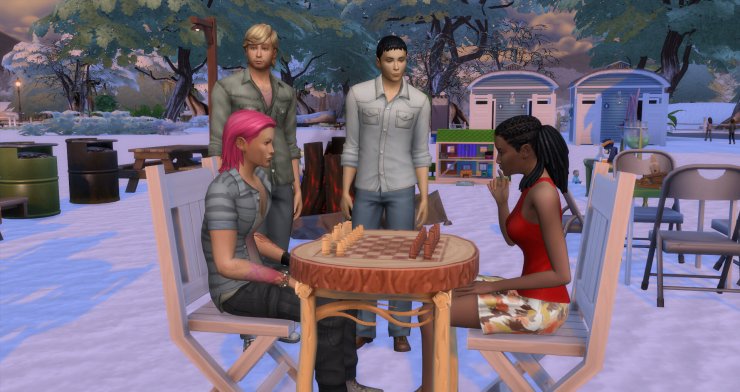 And then they returned to the park since nobody interesting was passing by their camp. 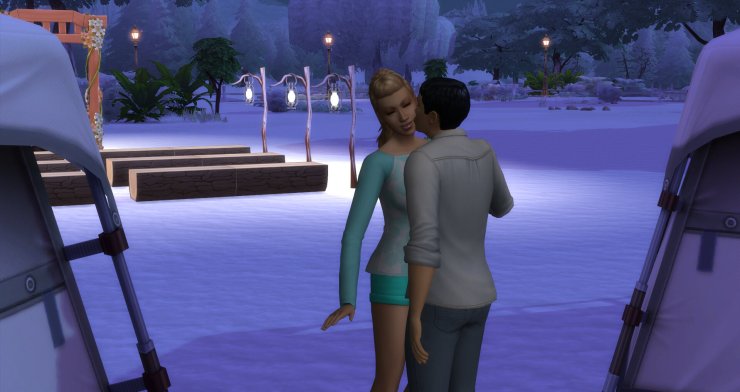 Elsa arrived and got a sweet kiss from Mack.  Will they make any headway in their relationship this time I wonder? 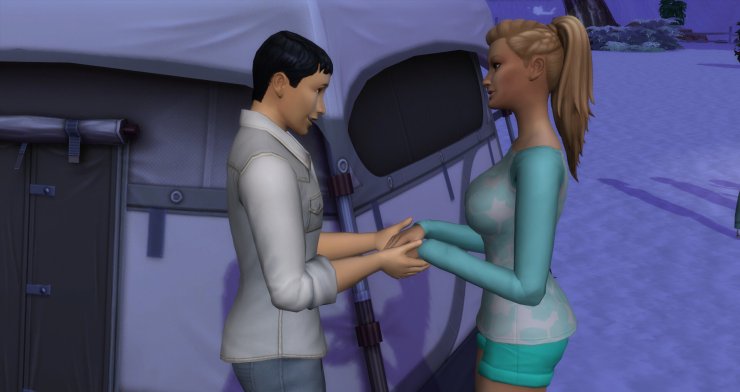 Apparently so!  Mack asked her to be his girlfriend!

Yes, that really is something to celebrate!

Michelle arrived and was quickly greeted with a rose from Christian.

Thankfully, nobody seemed to notice or ignored the tent action but maybe they should be moved?

Judy and her gigantic belly arrived next.  That must make hugging a bit… awkward.

As you can see in the background Maxwell arrived then and I was about to scream with my attention divided three ways! 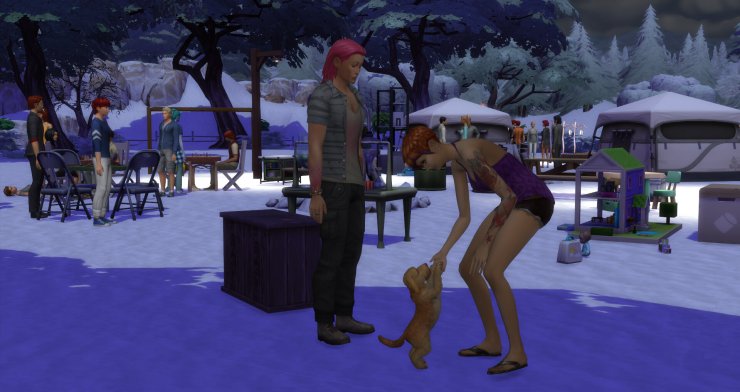 Although Siggy was a bit distracting.  It was odd that he was there because I’d removed the dog and cat lot traits when I put in the one drawing sims to the park… because I was seriously bored at the time.

Erick and Maxwell are absolutely adorable together. 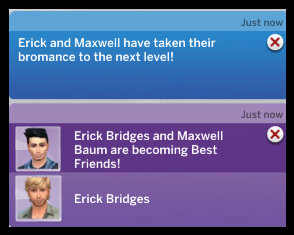 The real burning question is where are all of my childish sims getting those toys???

Christian asked Michelle to be his girlfriend!  Looks like things are finally progressing with the guys. 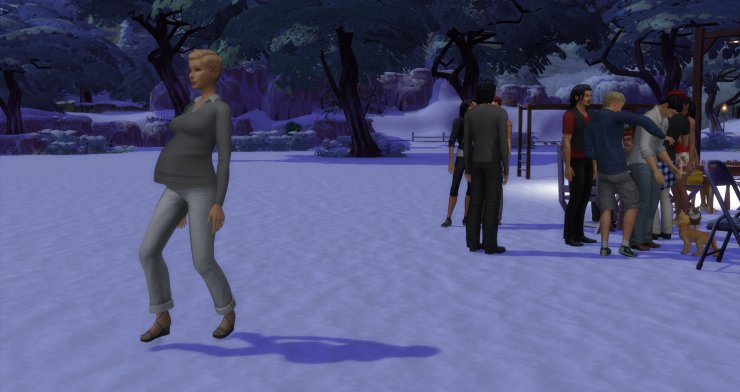 I snapped a pic as Judy left because wowza that belly!

So freaking adorable I swear!

Zion and Aimee were getting a bit romantic and Alvin seemed totally oblivious!  No baby for these two yet. 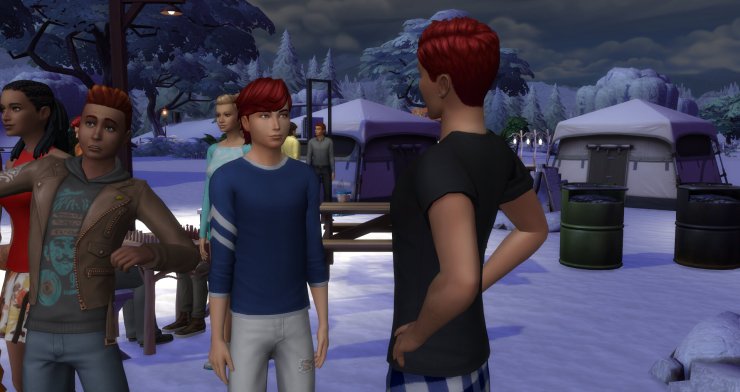 Tobias seems quite proud.  I think he’s finally worn his dad down and convinced him to meet Vicente’s mom Kersitn. 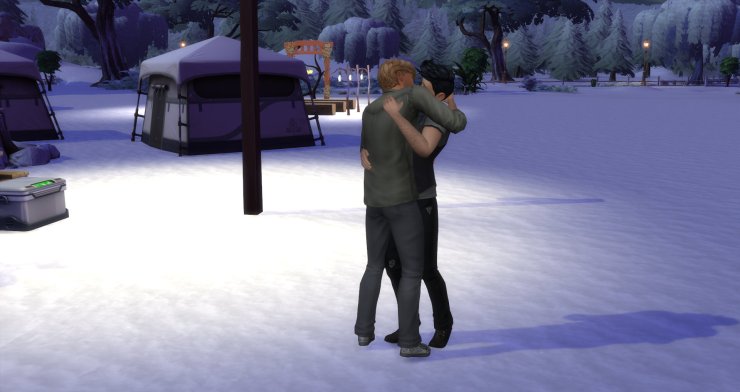 I thought maybe things would progress? 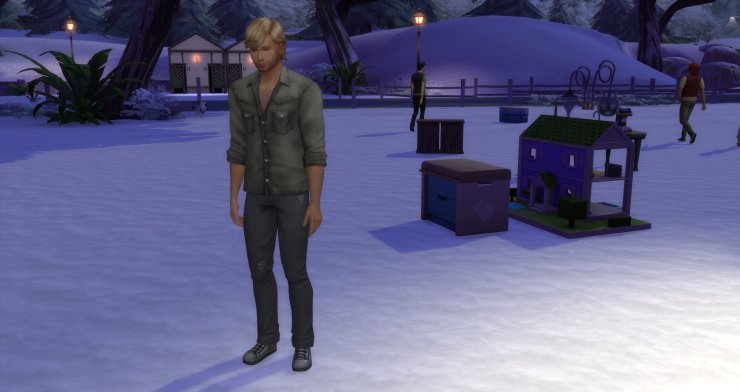 But no.  Maybe next time Erick.

With both Michelle and Maxwell gone and Christian and Erick napping in the tents I waited hoping something more might come of these two.  But then Elsa decided to leave as well.  I was just about to take the guys home to their camp when… 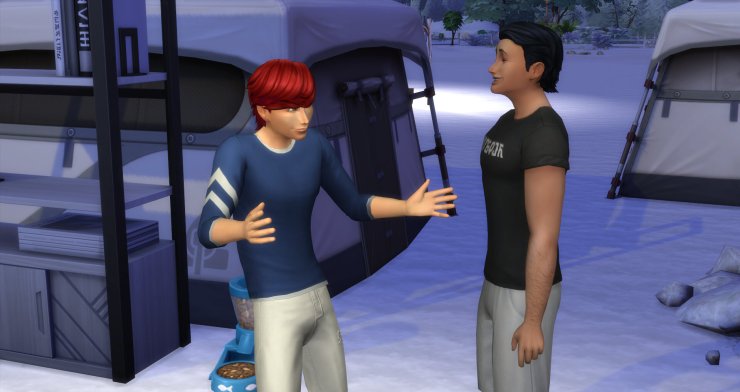 I saw Vicente and Luca talking!  I’ve never seen them together or talking before.  Of all the matches I know for sure this was one.  Not as high as Enzo and Tobias of course.  Nobody’s as high as them.  There are two that are children that are close though.  One of the reasons I’d rolled more teens was the hope I’d find a good match for Isaac but there are none so far.

Chapter note:  I can’t believe just the guys took up a whole chapter!  I took a lot of pics of the next one (Alvin and Kersitn!) so I’ll cut this off here.