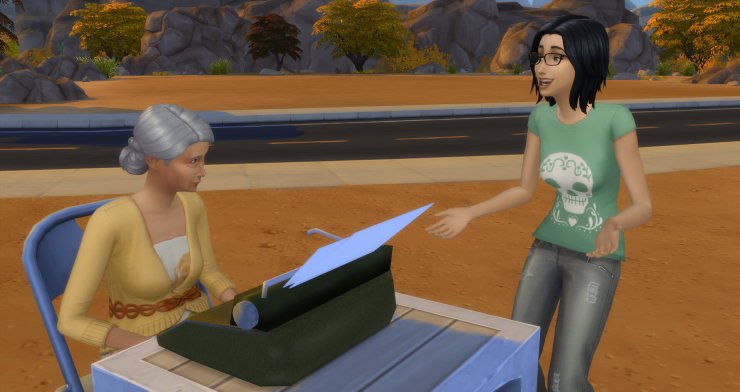 Tanya shares the news of her crush on Stephon with grandma Cecilia.  It’s hard to believe she’s almost 17 already!

They arrive at the supply area and try to decide if there’s anything they need.  No fish cooler since Tanya is a vegetarian.  They both already have tasks they fulfill for the group so that didn’t leave very much for them to take home with them.

Cecilia decides a stool would be nice to keep Tanya off her chair!  Tanya grabs one of the rubber mats she heard that were good for yoga. 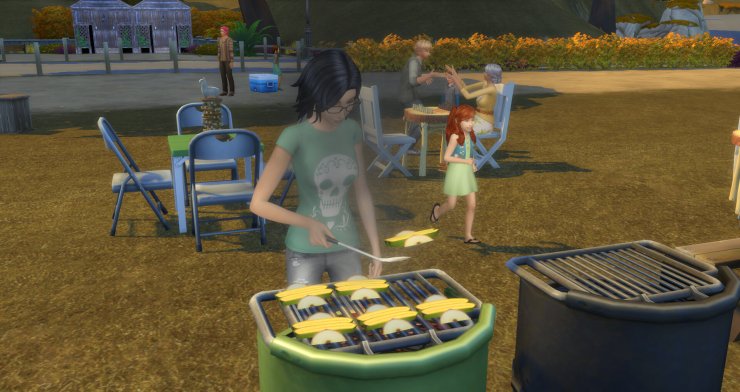 Then, they’re off to the park for school and food.

*swoon* I swear I get so excited when I see them together!  I’m going to be so heartbroken if it doesn’t happen. 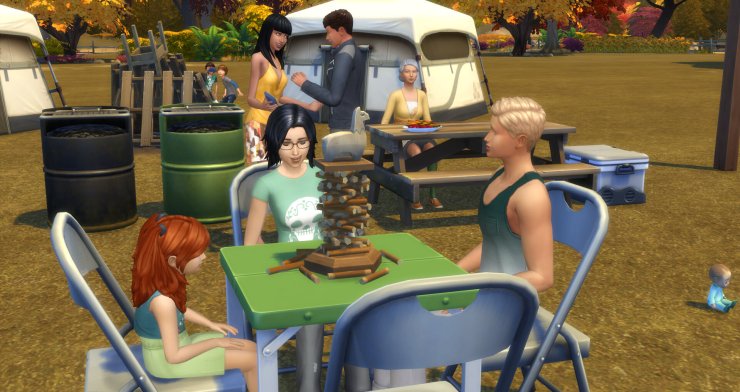 And then embarrasses Tanya by talking about it with him right there!

Tanya decided she wanted to play a trick on Skylar.  Skylar must have fully approved because she immediately wanted to hug her!

I think the little ones look up to her.  She’s a great role model so that’s good!

When Tanya notices Stephon reading and chatting with Saya she gets upset.

I guess I was so preoccupied with the adorableness of them that I didn’t take screenshots.  School was over and she asked him to stay and they went to this little area to the side of the park where she revealed her crush and then kissed him!  Awe!

And then… he ran away! 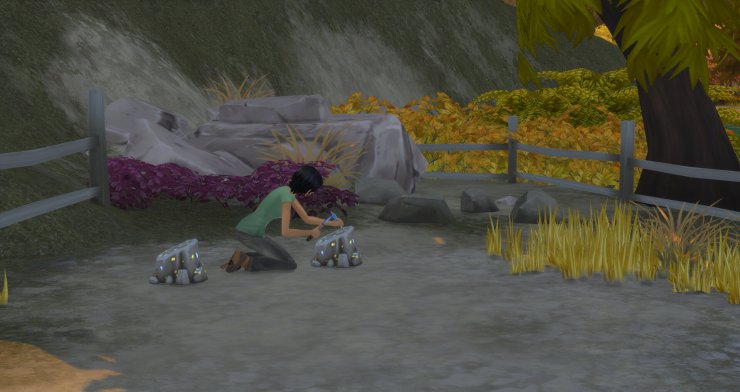 After that, she stayed and grabbed collectibles around the park.

She was so upset earlier she never finished eating.  When she went over to grab a plate two of the new boys were there!  She introduced herself to Dylan but Vicente immediately left.  (Next to Tanya, Dylan doesn’t look as awkward.  I think it was comparing him to his father and cousin that made him look that way to me.) 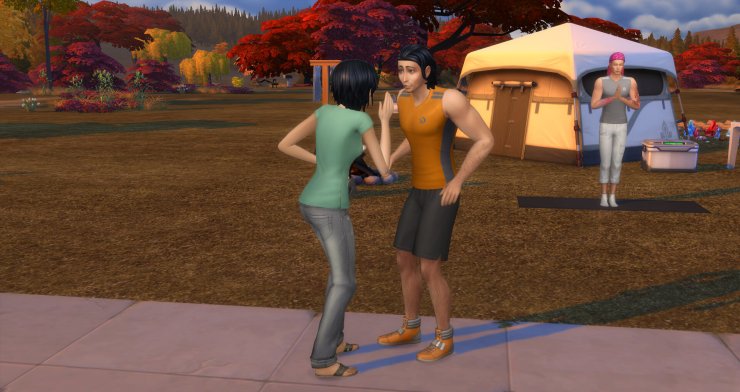 I think Drew was quite shocked to hear that his “little sister” had her first kiss!

After leaving the herbs with Drew and collectibles with Mack she headed to the dark area of the lands to give Naomi the berries she’d gotten.  And was given some more pickled carrots that she loves so much as well as some jam.

She stopped over at the Larsen’s camp next.  Kiera was the only one there.  She said her dad was fishing and Brock was with Bryanna probably making kissy face.  Tanya laughed and left the frogs for Kenneth.

Getting the carrots reminded her that she hadn’t harvested this little garden area yet so she did that and ran around grabbing anything else she’d missed.

That’s right folks.  Bryanna is now 18.  Brock’ll be aging soon as well.  And this is the reason I have the teen/adult relationships on…

Also, while I was doing all the townie heights and stuff I took a peek at Tobias’s relationship panel.  I was heartbroken to see that he and Enzo barely have any relationship at all!  Oh, the travesty!

At the Mesner’s camp, Layla woke up starving followed soon by both of her older brothers.

Poor Dean.  He looks like he’s thinking “If she says she’s hungry one more time…” 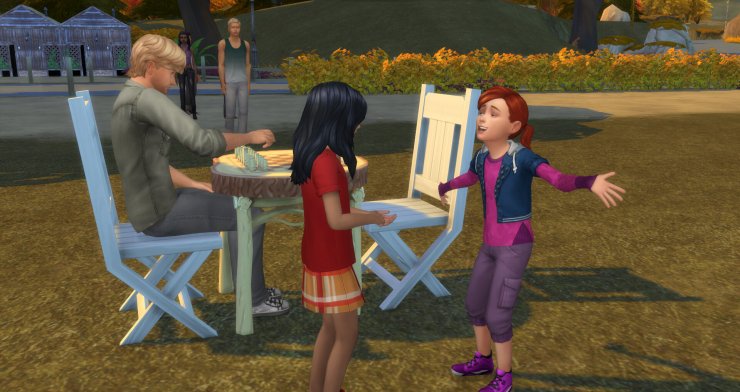 Layla chats with Enzo’s little sister Sierra.  (Who I finally figured out why she looked so darn weird!  Her weight was all the way at the very bottom of the scale!)

Awe so sweet.  Erick back there is giving them the eye though.  Probably not the best place for this. 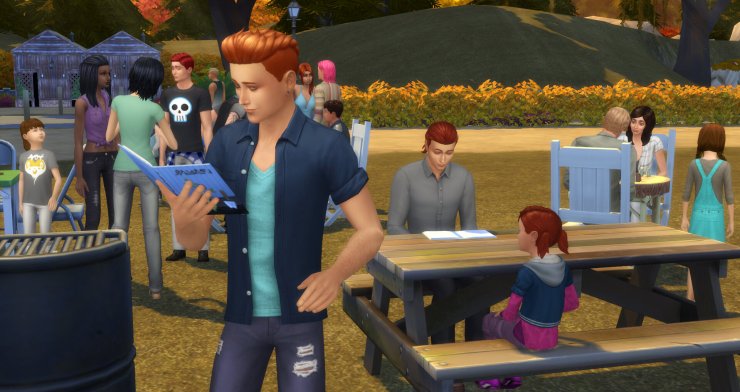 Isaac read the gardening book and Dean decided to stick around with the kids for awhile and read some handiness.  You never know when you might need it… I guess.

Yes, I’m sorry.  I just can’t help but take a pic when I see them together.  I think I’ve read too many romance novels.  *blush*

Umm… yea.  Another.  But look!  They’ve been talking!  More than just a few seconds to look at each other’s phone.

Oh Tanya, you and those jars!  I can’t help but laugh every time I see her carrying one around like a prize. 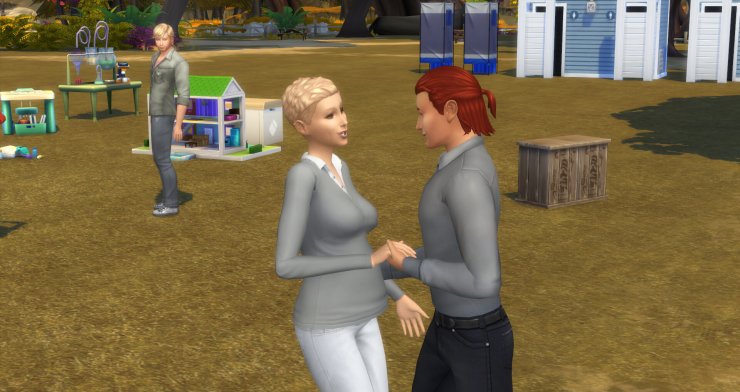 And then!  Well, Dean wasn’t surprised but I sure as heck was!  He asked her if they could go somewhere alone to talk and that’s all we have room for today!  Mwahahahaha!