A/N: I’m excited to announce that if you take a look at the Resident Profiles page on the Ash Shore site you will see that it has new additions!  Yes, my obsession with townies has gone to whole new levels.  I’ve given several of them makeovers, personality profiles, and even back stories!  Some of these sims you have already met and others might be new.

Since Kiera missed out on the volcano project she got to lead a new one.  I don’t think her or Erick are very interested in Christian’s opinion.  Brock and Layla don’t seem to mind and are engrossed in their tasks. 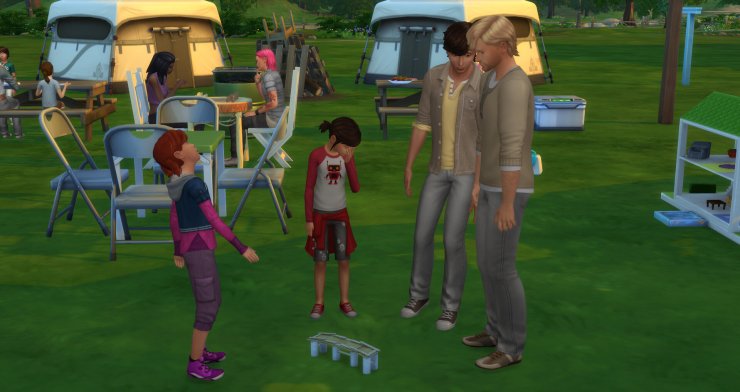 Perhaps it was the distraction?  The bridge was put together poorly.

Meanwhile, dad is fishing up a storm oblivious to everything else around him.  Which is how we like him.

It was discovered that there were some skill books amongst the supplies and Brock began studying the gardening book.

Quinton was playing dolls and Kiera went to join him.  Unfortunately, don’t hold much hope that she won’t take after her dad.  Just sayin’.

The teens played some cards.

When the Larsen’s went home Kiera invited Layla along.

And Brock went back to his gardening.  Some of the trees seem to be much faster growing than others and two turned out to not be trees at all! 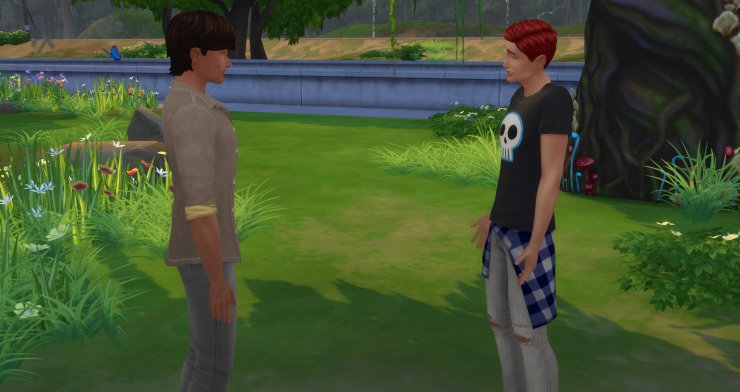 Brock met a new boy Tobias.  They may have a similar hair color but Tobias and Layla are not related.  Tobias lives with his dad and Layla lives with her two older brothers.

And look who’s fully grown and has his own name!  Bovineferious!  Ya know, every story has to have a sim that you love to hate and right now that poor soul is Kenneth.

This entertainment was provided by Coolspear’s Peace-Loving-Long-Lived Cowplants mod.  I love modders.  And the totally awesome name was provided by my son who when I asked gave me this and said it’s a carnivorous bovine!  Kid’s too smart for his own good!

Kiera was fascinated and stood watching him the whole time she ate.

Oh!  Here’s one of Layla’s brothers now!  This is Issac.  What cuties they both are!

As morning dawned Brock packed up the two non-tree plants.

And brought them to Judy since she’s the green thumb of the group.

After Brock left Judy, Sophia, and Kyra made their way to the park.  Brock had let them know that he’d just grilled some fresh fish and it was still good when they got there.

Since they all changed their clothes washing needed to be done.  Some of the other’s had left washing as well so Judy took care of theirs too. 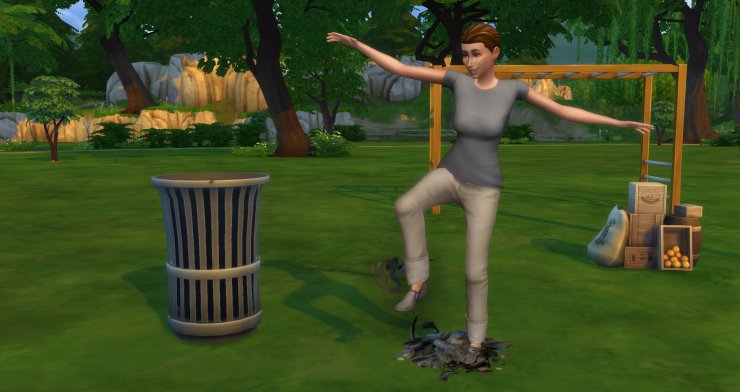 Really, Judy and Sophia are almost complete opposites!  Judy the neat freak and Sophia digging in the trash and then playing with it… right after a shower!  I don’t think a shared love of animals is enough to keep them in the camp together.

Kyra woke from her nap and Elsa chatted with her as she played dolls.  This cutie is 3 1/2 years old now!  Elsa has an awesome pooch named Khaled.  He has to be the coolest randomly generated dog ever! 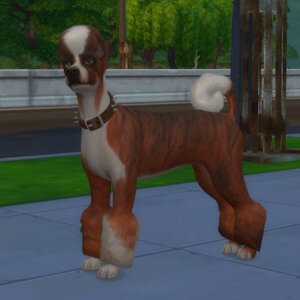 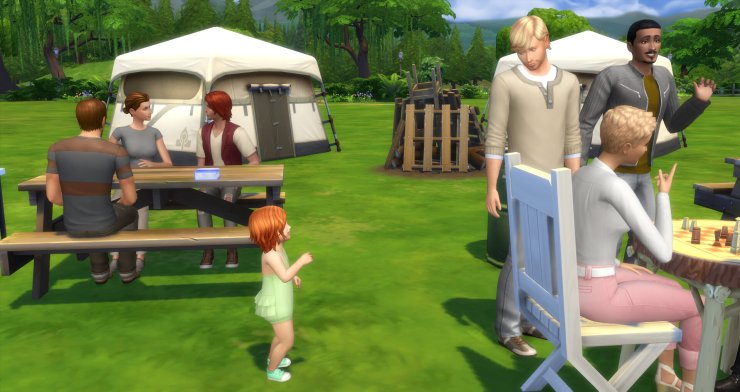 Then the park started filling up and there were plenty of people for all of them to chat with. 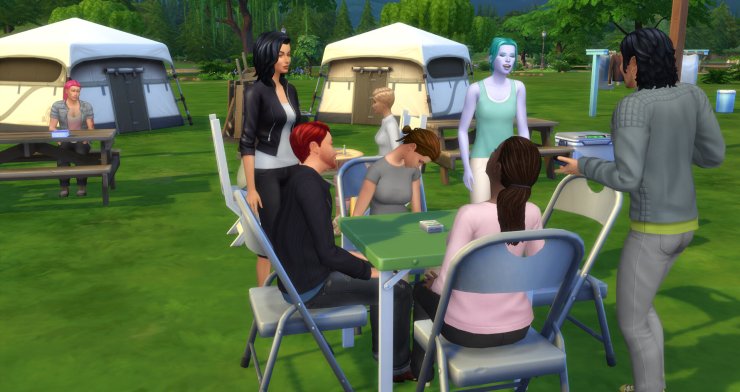 Seriously Sophia???  The annoying part is that I kept waking her up and telling her to chat or do something and she would immediately go back to sleep.  She was barely in the yellow!

She finally woke up to grill some burgers and flirt with Vaughn some more.

And soon after they got back Judy went to sleep and Sophia decided to take another nap.  Luckily, Kyra is in her own world.  She’s such a sweetie.  (This is also when I remembered that they were supposed to be meeting strays to train… oops!  I was having fun watching everyone at the park!)

Tanya might be very shy but she has a playful side that only those closest to her get to see.  Like her grandma Cecilia.

As Tanya wandered off Cecilia got a happy look on her face.  I’m sure she’s grateful to have her granddaughter around.

Time to collect.  Although, we have more than enough for now! 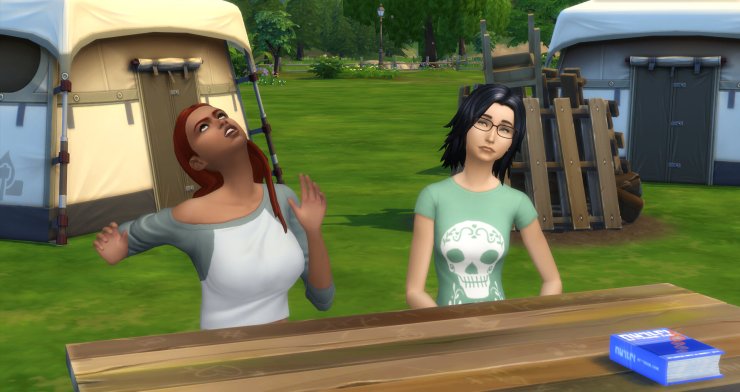 Tanya left Cecilia back at the camp writing but I think she’d rather be back there too.  Bryanna was whining about something.  Probably her kid brother Efrain.

Carley seems a little more likable at least.  The teens played cards for a bit… 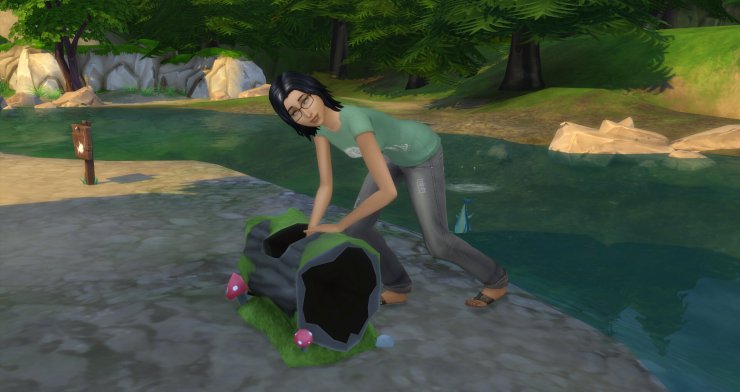 But soon Tanya was off in her own world again.

I saw this when I had the game paused to take that pic!  Swim rainbowfish swim!!!

This time, Tanya went to Brock’s neighborhood first and found all of the collectibles there before handing over the frogs to Kenneth to fish with and stayed for a little while to hang out with Brock.

Then, she went back to the guy’s camp to give Mack the rest of the collectibles.  (And no, Mack and Christian aren’t flirting.  It seems the “flatter” interaction is identical to flirt!  How confusing.)